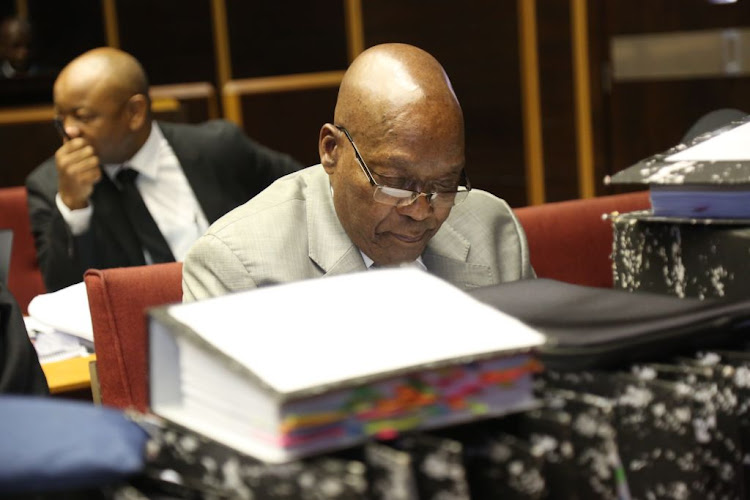 Former South African president Jacob Zuma in the Pietermaritzburg High Court on May 23 2019 where he is seeking a permanent stay of prosecution.
Image: JACKIE CLAUSEN

Another key witness who could have shed more light on corruption charges against Jacob Zuma is unavailable.

The National Prosecuting Authority's advocate, Wim Trengove, told the Pietermaritzburg High Court on Wednesday that he discovered during the tea break that Delique, who had been living in Pretoria, had died.

Delique had given evidence about an encrypted fax at the trial of Zuma's former financial adviser Schabir Shaik, almost two decades ago.

Thetard was the author of an encrypted fax which allegedly detailed an annual R500,000 bribe from French arms company, Thales, to Zuma for protection from an investigation into the controversial multibillion-rand arms deal. 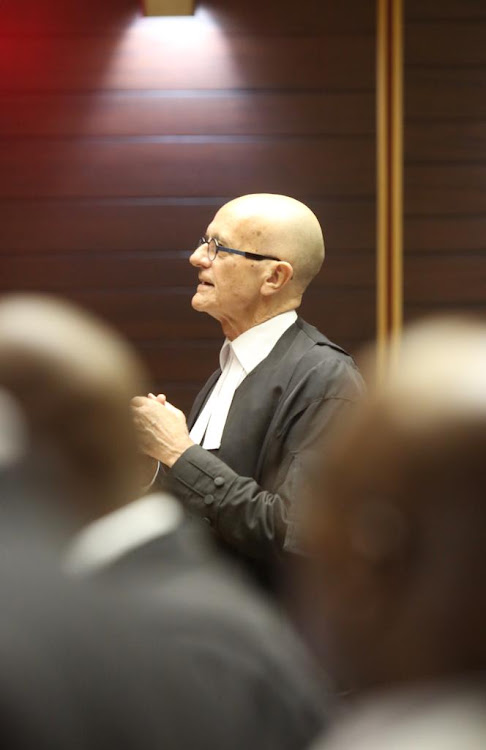 Wim Trengrove SC for the State in the Pietermaritzburg High Court where Zuma is seeking a permanent stay of Prosecution.
Image: Jackie Clausen

The alleged bribe was facilitated by Shaik.

Trengove on Thursday said the case against Zuma was a "very serious and a strong case."

He said if Zuma escaped facing corruption charges it would create the impression that it was because he was a high-profile person.

He has told the court the delay in bringing the matter to court, which Zuma claims violates his right to a fair trial, was caused by Zuma's "Stalingrad approach".

Trengove claimed that the approach was to use every delaying tactic to ensure that Zuma would avoid facing corruption charges.

"The primary cause of the delay was protracted litigation by Zuma over a period of time," Trengove said.

He said the state should not be blamed for the delay and that there was not a "shred of evidence" to prove claims by Zuma's defence team that his prosecution was politically motivated.

In 2007, Zuma's then advocate Kemp J Kemp told the Durban High Court: "We have adopted a Stalingrad strategy in response to this prosecution ... we will fight [the state] in every street, in every house, and in every room."

Since then, under instruction of Zuma's long-time attorney Michael Hulley, his defence team tried every possible legal avenue to prevent him from being prosecuted.

Zuma is no longer represented by Kemp or Hulley.

Former President Jacob Zuma has agreed to strike out a number of his sworn accusations against the lead prosecutor in the corruption case against him ...
News
2 years ago

Earlier the court heard that former president Jacob Zuma had agreed to strike out "vexatious and insulting" allegations he made against lead prosecutor Billy Downer in court papers.

At the beginning of Thursday's proceedings in the Pietermaritzburg High Court, Trengove said Zuma had conceded to remove parts of an affidavit he made in support of his application for a permanent stay of prosecution.

Downer labelled the statements "scandalous and vexatious" when he asked the court to rule on them being removed from the document.

Downer had called the statements - which claim that he hates Zuma, is blinded by an obsession with convicting the former president and that some in the National Prosecuting Authority may have apartheid withdrawal symptoms -  untrue and unwarranted.