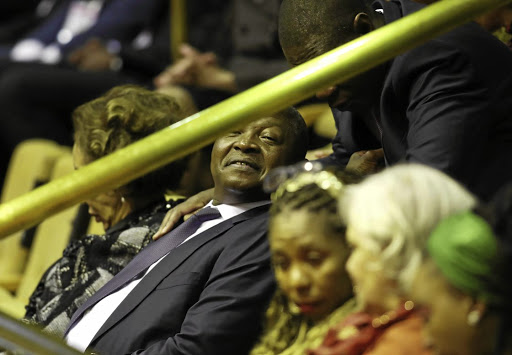 ANC deputy president David Mabuza has done it again, leaving SA guessing about his next political move - while he consolidates his power.

The country was left with many questions yesterday morning when President Cyril Ramaphosa, in his capacity as ANC leader, announced that Mabuza had asked not to be sworn in as an MP as he wanted to first clear his name before the ruling party's integrity commission.

"In the meantime, he has decided nevertheless to follow the dictates of his conscience and postpone his swearing in..." Ramaphosa said.

The president applauded Mabuza for "his resolve to put the interests of the ANC first".

According to a City Press report a month before the May 8 elections, Mabuza is among 22 ANC leaders whose nomination as parliamentary candidates was "flagged as problematic" by the commission.

Deputy president David Mabuza will not be sworn in with the rest of the members of parliament today.
News
3 years ago

It is not clear why Mabuza has been the only one on the list who has decided not to take up his parliamentary seat until his name is cleared.

His spokesperson, Thami Ngwenya, said Mabuza's decision was in line with the party's new approach where it requires those who are accused of corruption to clear their names before taking up positions of responsibility.

"Remember, there is an issue of renewal here and therefore these processes must be followed," said Ngwenya.

ANC sources close to Mabuza claimed he first told party officials he was removing his name from the list but they advised him to merely postpone his swearing in until he has had a chance to speak to the integrity commission.

Mabuza's decision has sparked speculation that when Ramaphosa announces his new cabinet on Monday, Mabuza would be replaced either by outgoing higher education minister Naledi Pandor or minister in the presidency Nkosazana Dlamini-Zuma.

It has also raised questions whether a new power struggle has begun in the ruling ANC, even before Ramaphosa has taken office under a fresh popular mandate.

Mabuza has become notorious for playing his cards very close to his chest when it comes to political contests. In the run-up to the ANC elective conference in 2017, he was widely seen as part of a faction that wanted Dlamini-Zuma as president while, behind the scenes, he allegedly encouraged his Mpumalanga delegation to back Ramaphosa.

The delay in the swearing in of ANC deputy president David Mabuza as a member of parliament may result in President Cyril Ramaphosa  appointing a ...
News
3 years ago

The integrity commission's chairperson, George Mashamba, said the body planned to meet Mabuza and others who want to challenge its report this weekend.

"The meetings are scheduled to happen from Sunday to Tuesday and we have intentions of meeting with anyone [who wants to challenge the report]," Mashamba said.

"He will come with issues that he has and we will discuss those. I don't know what he [Mabuza] will raise."

Although it is possible that the meeting could lead to Mabuza changing his mind by Monday, hence availing himself for selection as deputy president, speculation is rife that Ramaphosa may be looking at Pandor, Dlamini-Zuma and Lindiwe Sisulu as possible candidates.

Political analyst Somadoda Fikeni said it was possible that Mabuza was staying behind at Luthuli House to consolidate his power or to keep an eye on the headquarters now under the control of secretary-
general Ace Magashule.

"There's a lot of bargaining that takes place before positions of cabinet. The Ramaphosa faction of the ANC might be extremely worried about leaving the ANC in Luthuli House to Ace Magashule and Jessie Duarte, so they will try to find someone who is senior to go and mark them and be a counter force."

The ANC's integrity commission refuses to reveal what party's deputy president David Mabuza is accused of, saying its report is the property of ...
News
3 years ago

When President Cyril Ramaphosa announces his new cabinet next week expect the unexpected - including the possible omission of deputy president David ...
News
3 years ago

Nomvula Mokonyane has asked the ANC to reconsider her deployment as the House chairperson.
News
3 years ago
Next Article