Zuma should have been charged with Shaik‚ says his advocate 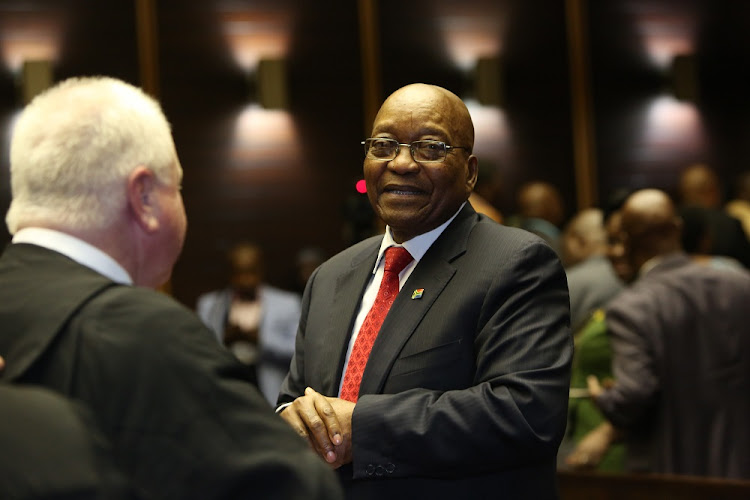 Where would former president Jacob Zuma be if he had been charged with his former financial adviser Schabir Shaik? A long way from the corruption charges that he is still trying to fight‚ his lawyer advocate Muzi Sikhakhane told the Pietermaritzburg High Court on Monday.

Zuma's new legal team did an about-turn during his application for a permanent stay of prosecution‚ arguing that he should have been charged with Shaik more than a decade ago.

Sikhakhane argued that had Shaik and Zuma been co-accused‚ the former president would have been able to cross-examine evidence that had implicated him. "The evidence that we know as incontrovertible today may not have been so‚" he said‚ adding that Zuma's absence in the Shaik trial amounted to him being tried in his absence.

Zuma is facing 16 charges that include fraud‚ corruption and racketeering. These charges relate to 783 payments that he allegedly received as a bribe to protect Thales from an investigation into the controversial multibillion-rand arms deal. The alleged bribe was facilitated by Shaik.

In arguing for a permanent stay of prosecution‚ Zuma's legal team is relying on:

the delay in Zuma being charged; the irregularities in the matter; the former president being spied on in a "Cold War" styled operation; and interference in the investigation from the country's executive. Sikhakhane has argued that unreasonable delay in prosecuting Zuma breached his constitution right to a fair trial.

Throughout his argument‚ Sikhakhane referred to the manner in which Zuma was being prosecuted as "lynching".

"If you're out to lynch him‚ you might miss the pattern of mala fide [bad faith]‚" he told the court.

Sikhakhane said the state's approach has been one of "mob justice" as it continued to pursue Zuma‚ even though it was done in an unconstitutional manner. He described the NPA's approach to prosecuting Zuma as: "We think you're guilty‚ so we will deal with you any way we want."

He argued that while the nature of the alleged offence was important‚ it did not warrant the state to act "unlawfully and unconstitutionally‚ because it doesn't like something that someone may have done".

To emphasise his argument that political interference was at the heart of the charges‚ Sikhakhane has been reading transcripts of the so-called "spy tapes" into the court record. These are recordings of phone conversations between then NDPP Bulelani Ngcuka and former Scorpions boss Leonard McCarthy discussing the timing for prosecuting Zuma in order to boost the chances of Thabo Mbeki being re-elected.

Sikhakhane will continue his argument after lunch.

Jacob Zuma's new legal team will use the next few days to try to prove that the application for a permanent stay of prosecution has "great potential" ...
News
3 years ago
Next Article