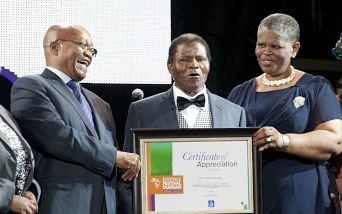 Former president Jacob Zuma has vowed to show under-fire eThekwini mayor Zandile Gumede "the same support that she has shown me for the past decade".

Gumede was a known political ally of the former president. She, and two others, appeared in court on Tuesday on corruption, fraud and racketeering charges. They were granted R50,000 bail each. Nine others had previously faced charges linked to the alleged corruption.

Taking to Twitter on Sunday - the day before he was due to appear in court as part of his own corruption case - Zuma said that he had "learned" of the charges against Gumede.

"Be strong my Leader, this too shall pass," said Zuma.

I shall show Comrade Zandile Gumede the same support that she has shown me for the past decade. Be strong my Leader, this too shall pass.

He said he hoped the charges were "not politically motivated and that the state has enough evidence to substantiate this charge".

"I speak from experience from my own politically motivated charges," he tweeted.

The reference to the alleged political motivation behind the charges echoed comments made by her supporters, who marched to the Durban city hall on Friday.

On Monday, Zuma is expected to appear in the high court in Pietermaritzburg in relation to decade old charges related to the controversial Arms Deal. The court is due to deal with an application for a permanent stay of prosecution.