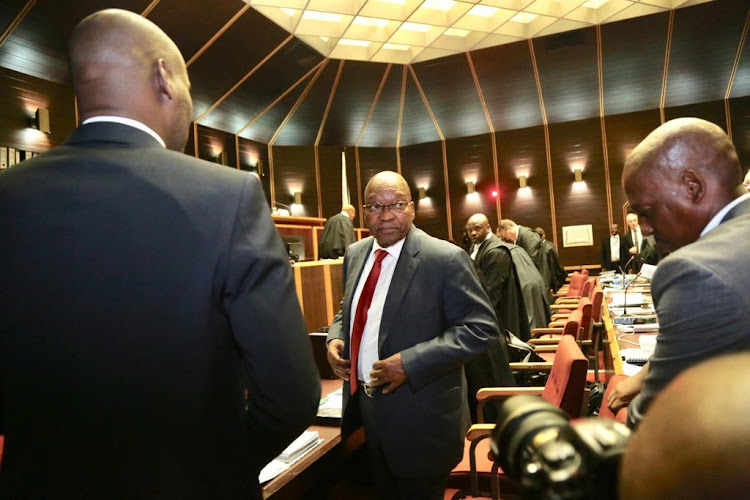 Former President Jacob Zuma in the Pietermaritzburg High Court on Monday. His defence team has argued that the NPA was guilty of prosecutorial misconduct in its case against him and his co-accused, Thales. The latter is to present argument in court on Tuesday.
Image: Jackie Clausen

French Arms company Thales will on Tuesday attempt to convince the Pietermaritzburg High Court to grant it a permanent stay of prosecution.

On Sunday, Thales, former president Jacob Zuma's co-accused in the high-profile corruption case, issued a statement in which it maintained that it would also not receive a fair trial due to a "very long delay" in proceedings and factors that were out of its control.

Zuma is facing 16 charges that include fraud‚ corruption and racketeering linked to the controversial multi-billion-rand arms deal.

"Bearing in mind the very long delay of this procedure — through no fault of Thales at all — together with a range of factors beyond its control‚ Thales believes it cannot obtain a fair trial‚ as it is entitled to under the SA constitution and international law‚" the statement said.

Whistleblower Patricia de Lille believes the arms deal trial involving former president Jacob Zuma has to take place so that all allegations can be ...
News
3 years ago

On Monday, after Zuma's legal team argued for a stay of prosecution, Thales lawyer Anton Katz told the court that prosecutorial misconduct would also be the crux of its case.

Judge Ester Steyn interrupted Katz's brief explanation on what to expect to advise him to also address the court on whether the state breached the National Prosecuting Authority Act when investigating and charging the pair.

Thales is accused of paying Zuma a bribe for protection from an investigation into the controversial arms deal. The alleged bribe was facilitated by Zuma’s former financial adviser‚ Schabir Shaik.

Jacob Zuma's new legal team will use the next few days to try to prove that the application for a permanent stay of prosecution has "great potential" ...
News
3 years ago
Next Article