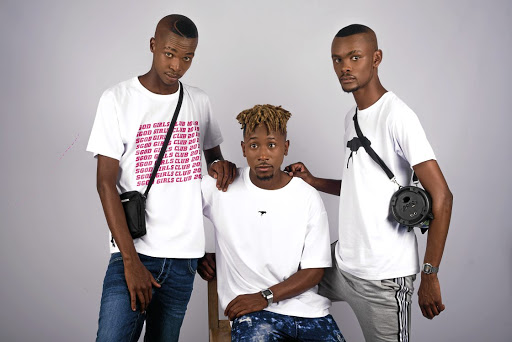 It's time to take an Uber ride to December and the festive season with the song that has been billed to win the coveted 2019 Song of the Year honour.

Amapiano smash hit Labantwana Ama Uber that was recently certified gold, has come out of nowhere to rock Mzansi's summer playlists. Even more fascinating is the rags-to-riches tale of the music trio behind the dance anthem.

Just six months ago, the Soweto-born trio of Sicelo "Miano" Sikhosana, Kamogelo "Kammu Dee" Duma and Tumelo "Semi Tee" Ramaila were just like other boys in the hood, searching for their big break in life.

A year ago, the pint-sized Miano, 23, was roaming the streets of White City, Soweto, having given up on his dream of becoming a soccer star.

"I got tired of playing soccer everyday and training. I was hustling on the streets," Miano says.

"I had thrown in the towel thinking I was nobody, so the only thing to do was hit the streets and be nobody."

Artists must not promote social ills

Music makes the world go round, goes the dictum.
Opinion
2 years ago

The duo had made a total of six songs together that didn't receive much attention outside of their neighborhood.

"I didn't expect it to happen like this but I had high hopes because we (him and Semi) were working on so many songs thinking that any one of them will be our big break."

Semi Tee was in his bedroom constantly working on new beats to give them the big break they were in search of.

He came up with the catchy Labantwana Ama Uber beat.

Semi Tee met charismatic Miano in April at a party and he immediately knew they needed to work together.

Before long, Miano and Kammu Dee were working on the lyrics for the song to go with Semmi Tee's beat.

The end result is the captivating and witty lyrics: Eh bathi ugezel' ekhishin, oku worse endishin', ngevaslap kamamncane (you take a bath in the kitchen, even worse you do it in a washbasin, using your aunt's face cloth).

Sister Bettina is the national anthem of men are trash

There are a lot of songs that can get you off the wall and mid-squat on a dance floor where no doubt someone else is going to pounce out of nowhere ...
Opinion
2 years ago

"We are from the hood, it's things we see on a daily basis. So we took that and mixed it together," Miano explains.

"We grew up taking a bath in the kitchen, and when your face cloth is not around and you are in a hurry, you end up grabbing someone else's and using it. So we all know that one person [who did that].

"The lyrics were there and when they mixed with the beat, it was a bomb. It was a 50/50 process," Kammu Dee adds.

"Our parents listen to the song all the time - when cleaning the house and doing laundry. They ask us every time what the lyrics are about."

The song has strongly come under fire and drew controversy for glorifying drug use.

However, the trio strongly insists that the song decry drug abuse in the hood.

"We are saying the things we see in the hood, like bunking school and blessers, are completely wrong," Kammu Dee says.

"We are saying when you grow up from nothing, you will do anything to make sure that at home there is something.

"So we are telling them to wake up and focus. Everyone has been on a dark path, but don't let it define you. Let me go on the record that none of us have done any drugs. We have no criminal record and we have never stolen anything," Semi Tee adds.

If toddlers aren't singing your song how can you call it a hit?
Opinion
2 years ago

The trio blames the controversy on the viral dance challenge that they do not support. Many have recorded video clips of themselves dancing to the song with dance moves that depict rolling a joint.

The trio is so hot right now that they are fully booked this month until December. They strongly want to win song of the year and jokingly say they don't want a King Monada situation. Monada gained momentum with Malwedhe last year, but lost out to Skeleton Move by Master KG.

"It's the biggest song in the country right now; people must do the right thing. This song is worth it," Kammu Dee urges. The trio have new songs with DJ Maphorisa and Killa Kau.

Flamboyant musician and reality TV star Penny Penny is proving why he's a master at starting over with his new amapiano record.
Entertainment
2 years ago

My P.E experience: the good, the bad and the ugly

They say the world is your oyster. And that's exactly what it felt like when I was lounging on a boat in the middle of the Bay snacking on fresh ...
Good Life
2 years ago

Sho Madjozi’s song John Cena has been a viral sensation since it first came out in August. We round up three of our favourite videos of people from ...
S Mag
2 years ago
Next Article