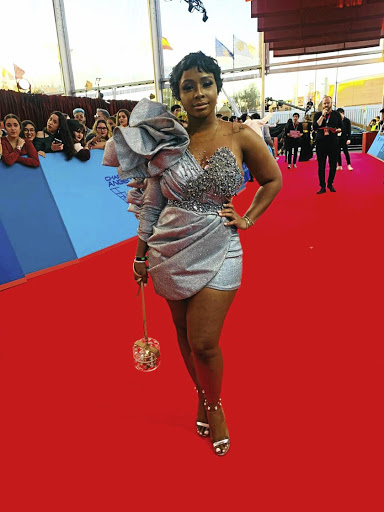 Not even airport drama from hell could prevent starlet Boity Thulo from shining at the MTV Europe Music Awards (EMA) in Seville, Spain, last night.

The 29-year-old star rocked the red carpet in an Orapeleng Modutle bodycon number.

She was joined by A-listers such as Akon, Nicole Scherzinger, Terry Crews, Joan Smalls and Niall Horan.

"I was looking forward to slaying the red carpet, seeing all the celebrities there, making connections and just enjoying a great show," Thulo told Sowetan.

"I chose a short look because the EMA are not that serious. You have to look youthful, fun and comfortable.

"This is a big deal for me. It's been a long time coming. For so many years it was such a struggle to get invited to such things.

"You are treated like a real star, you get to feel it and not beg people to put you in certain spaces."

Thulo was initially scheduled to depart to Seville on Thursday night but had to reschedule to Friday night due to visa issues.

After travelling to Zurich in Switzerland for 11 hours she missed her connecting flight to Seville. She had to wait for six hours to get a new flight that took her to Brussels, Belgium.

Thulo waited another two hours to connect and eventually arrived in Seville on Saturday night.

There was no time to rest on the night as she immediately changed and headed to the Green Day concert at the historical landmark Plaza de España.

"It's been a long day and build up to this day. I'm just glad it's here," Thulo said.

"The mishaps that have happened along the way for me to get here, I just want to make it phenomenal despite everything that happened before I could get here."

With all her travel nightmare, Thulo missed SA's historic Rugby World Cup win. At the time of the win she was in a lounge in Zurich.

"I found out 30 minutes later on social media after we won," Thulo said.

"I felt so bad because everyone back home was celebrating and I was waiting for a flight."