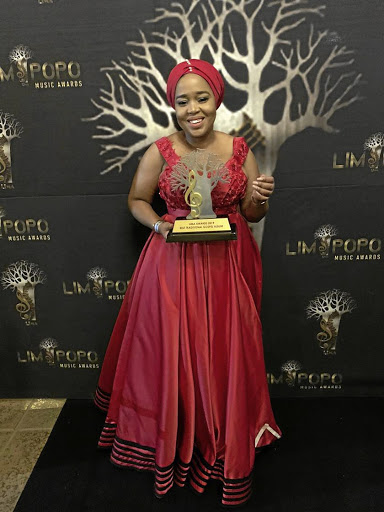 Winnie Mashaba poses with the Best Traditional Gospel Artist award she has won for the third time in a row. / SUPPLIED

For her latest album, The Journey with Winnie Mashaba, celebrating her illustrious 20-year music career, the 38-year-old singer scooped Best Traditional Gospel Artist at the awards held at the Meropa Hotel & Casino in Polokwane.

She won the award for a third consecutive year.

"It's an overwhelming feeling. I think I'm on the right track if people trust me with the traditional gospel award. It means I'm doing something good and I'm motivated to do even more," Mashaba said.

"My fans were waiting for me at the show to hold my award because it's really theirs. So, we sang together and celebrated. It was just an amazing mood."

King Monada was named Best Male Artist, while his hit song Malwedhe won Song of the Year. Last year, the Khelobedu disco maverick scooped Song of the Year for his single Taba Txaka Ke Txaka at the awards.

"Most importantly, last night was about celebrating Limpopo talent as you can see that recently we are on the limelight. It gives me so much pleasure to be one of those who scooped an award during this time," Mashaba gushed.

"Nothing beats that feeling of rubbing shoulders with your homies, because we are usually very busy. It's a very beautiful feeling," she said.

Winnie Mashaba looks back with pride