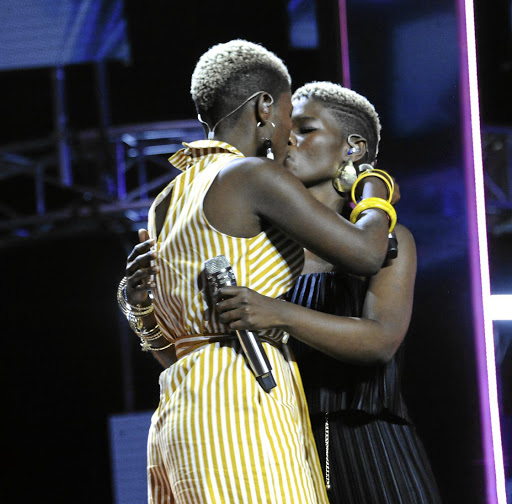 Police had to be called in to defuse tensions between the family of Idols SA twins Viggy and Virginia Qwabe and their fans and the Mzansi Magic production team on Sunday night.

Mzansi Magic told Sowetan yesterday the twins' father Laurence Qwabe led the charge in the fracas when he allegedly threatened to shut down the live production immediately after Virginia was eliminated from the singing competition.

As Viggy fought back the tears to stay in the competition with a rendition of Amanda Black's Sinazo, outside a commotion broke out, with her father apparently demanding that his other daughter be allowed to leave the stage so they could all go home.

When the show's publicist Irvin Pooe tried to intervene, Qwabe allegedly threatened to harm him physically.

Viggy quit the reality competition on the same day of drama in an apparent show of solidarity with her eliminated twin sister.

"They alleged the production and channel had manipulated votes. They were also outraged by one of the judges having said 'the twin might go home'," Philly Kubheka, HOD for PR & publicity Local Entertainment Channels said.

"The competition is not rigged and votes are verified by independent auditors.

"It became rowdy, we intervened as the PR team to hear the family's concerns.

"They were not willing to have a conversation and threatened to attack Irvin since he works for Mzansi Magic," Kubheka said.

Idols SA twin Viggy Qwabe has quit the show in a dramatic twist after her twin sister Virginia was eliminated from the competition.
Entertainment
2 years ago

Pooe confirmed the altercation but referred further questions to Kubheka, who said Pooe was escorted by the guards to a safer place.

"It's a public event and for the safety of everyone the SAPS had to be called as the family and fans were aggressive and threatened violence."

A source told Sowetan one person had tried to throw a punch at Pooe before Qwabe held the person back.

"They threatened to beat him [Pooe] up," a source said.

Qwabe confirmed that police were called, but declined to comment on the details.

"A lot has been said already in the media, I don't want to comment further.

"What I can say is that I was shocked when one of the judges said one of my daughters will go home and she did. I thought he was guessing, so for it to happen like that was a shock," he said.

A popular personality seated next to the family in the audience when Virginia's elimination took place said the family complained about Somizi Mhlongo's prediction that one of the twins will be voted off before storming out.

The press conference usually held with the eliminated contestant after the show was cancelled as a result of the furore.

A Top 10 contestant, who didn't want to be named, said there was no "drama" between Msomi and the twins.

"During my time there the twins were inseparable. They didn't interact much with us. Their reason was that we were always communicating in English and they couldn't relate since they speak isiZulu," the contestant said.