Steve for Bafana job is a sick joke 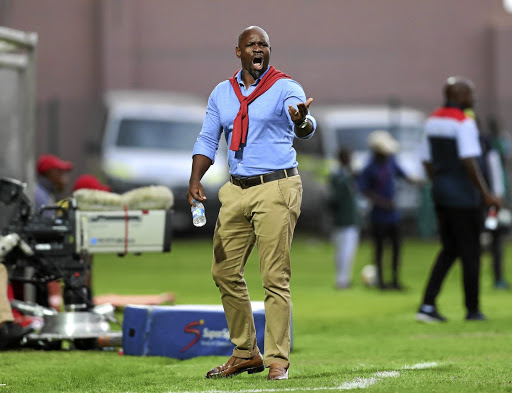 Since his coaching debut in 2002, Steve Komphela has been with 10 PSL clubs and three national teams. / Samuel Shivambu / BackpagePix

So, Steve Komphela is ready to be the next Bafana Bafana coach. I was stunned this week on hearing Bra Steve's wish. At first I thought we were just being fed an April fool's joke in August.

With some calling him a "hot favourite", I just wonder on which grounds does a man with such an unimpressive coaching record, both at club and national team level is regarded as a favourite for the hot seat?

That said, even some in the Safa technical committee tip Komphela to take over after Brit Stuart Baxter quit last week.

Komphela must tell us he was joking.

To his credit, though, the Golden Arrows mentor is no stranger to guiding national teams. He was shabby in guiding the under-20 and under-23 teams, and in 2012 temporarily held the Bafana reins on a caretaker basis, following the sacking of Pitso Mosimane.

At club level, he has jumped from one club to the other in pursuit of acknowledgement as one of the country's leading coaches, without success.

In April last year, he was forced to resign from Kaizer Chiefs after fans bayed for his blood following a 2-0 Nedbank Cup semifinal loss to Free State Stars.

Nonsensically, Komphela cites his three trophyless years at Chiefs as having toughened him, preparing him for the Bafana job. He must tell us he was joking.

The former Bafana captain and defender does not fathom that you can be a brilliant player but be a pathetic flop as a coach.

When nation calls, you serve - Steve
Sport
2 years ago

His club coaching career speaks for itself.

His record shows he is a perpetual drifter, despite a glorious career as a player in Turkey. To associate the name of the man from Kroonstad, in the Free State, with Bafana for the second time, is tantamount to playing a practical joke.

Since his coaching debut with Manning Rangers in 2002, Komphela has been with 10 PSL clubs and three national teams. After Rangers, he moved to Dynamos the next season, thereafter Maritzburg United in 2006. In 2008, he was with Free State Stars, and coached Platinum Stars the following PSL campaign.

He has had two second bites at the coaching cherry with Stars in 2010 and Maritzburg in 2014, then Chiefs, followed by Bloemfontein Celtic and currently Arrows. Komphela must tell us he was joking.

His hopping from one club to the next proves instability on his part, coupled with being fired for failing to guide teams to a top-eight finish or silverware. The only time he came close to winning a trophy was with Rangers in the 2004 Absa Cup where he lost in the final.

When he was appointed at Chiefs in 2015, replacing Baxter, Amakhosi were the reigning Absa Premiership and MTN8 champions. He stepped down after three trophyless seasons.

With such an inferior record, on what basis or credentials does Komphela think he can turn Bafana into world beaters? He has not won any major trophy.

In the interim, Safa has appointed Molefi Ntseki as a stop-gap measure until the technical committee appoints a permanent coach.

As things stand, Ntseki has been tasked with preparing Bafana for crucial Cameroon 2021 Africa Cup of Nations qualifiers against Ghana on November 11 and Sudan on November 19.

Komphela, a philosophical orator who thrives on his illogical analytical approach to defend his floundering tactics, likens his return to Bafana as a calling to serve the nation. Calling, what calling? Komphela must just tell us he was joking.