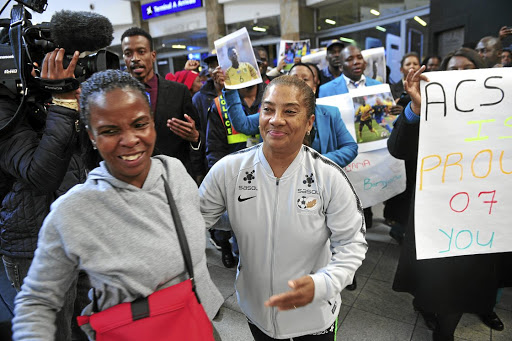 So Banyana Banyana and all members of the technical only realised after being knocked out in the first round of the Fifa Women's World Cup that their campaign in the showpiece was hampered by the fact that SA does not have a women's league. I ask.

So assured was coach Desiree Ellis and the girls they were worthy to be at the world football spectacle and would easily make it past the group stages that they never, ever once mentioned the issue of the league being an Achilles heel of women's football in SA.

Even during and after qualifying by finishing second to Nigeria and settling for a silver medal at the Africa Women's Cup of Nations in Ghana, the issue of a women's league was never raised as a prerequisite necessary for Banyana to become world beaters.

Instead the nation was in euphoria. We deceived ourselves that all our domestic women's football problems were over and Banyana were going to at least qualify for the knockout stages and perhaps the quarterfinals or semis.

Reality sunk in when Banyana lost all their friendly matches leading to the French jamboree. Ellis and Co got a rude awakening after realising Banyana were not in the same league as their opponents.

Only after being knocked out in the first round in France was the issue of not playing week in and week out raised as a reason for Banyana's dismal failure.

In three matches Banyana failed to secure a point.

Much noise was made about the video assistant referee and how it let Banyana down against Spain.

Now there is talk the mooted women's league will kick off in August. So have the logistics been in place all along?

I foresee yet another let down for women's football.

The matter of a women's league has been a talking point for years now, with Safa and the PSL paying lip-service. But nothing has come of the big talk. Only when Banyana are in crisis do we remember that by the way, there is something called a women's league.

This is worrisome. We seem to remember the issue of the league only when things go awry.

How Amanda Dlamini's still scoring after hanging up her boots

The league was first proposed under the leadership of the late Safa president Solomon "Stix" Morewa as early as 1992.

Successive presidents supported the need for the league, but alas, nothing came to fruition.

The fact that both Banyana and Bantwana participated in World Cups recently is laudable. It is a sure sign of improvement in South African women's football.

It is also sad that, despite these successes, women footballers still earn far less than their male counterparts at club and national level.

The revival of the plans to kick start the league by Safa signals another giant leap forward in the development of future stars.

But if indeed the dream is realised, it will be more than two decades later, as the current Banyana players find strength from campaigning overseas.

There is also a need for change in the mindset of club owners to invest in women's football.

Unless we have a mindset shift, the status quo will continue plaguing us to the detriment of women's football at international level.