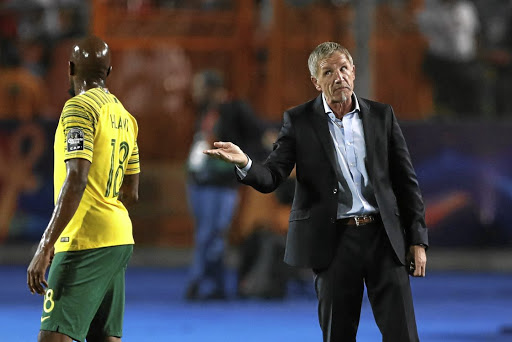 The ball is definitely in Safa's court, or rather in the penalty area for them to shoot.

Once again there have been renewed calls for Bafana Bafana coach Stuart Baxter's head after Wednesday night's loss to Nigeria's Super Eagles.

In this regard, I want to execute a little somersault, quickly make a sharp U-turn from last week's column calling for the firing of Baxter following Bafana's drab performance in the group stages of the Africa Cup of Nations (Afcon) in Egypt.

We can scream on top of our lungs but that decision rests with the national football body's head honchos at Nasrec.

Bafana had their moments in Egypt. But for hordes of their fans watching on small screens back home it was a case of being jubilant one moment, then disappointed and sorrowful the next. No consistency.

Against Egypt, and aptly so, the national team looked like giant killers ready to book their place in the final and emerge victorious.

I don't want to dwell much on the group stage matches or join the chorus of those calling for the coach's head after the Nigeria loss. I am only calling for the Safa technical committee to do the right thing.

Safa must come up with a clear plan for qualification for Afcon 2021 in Ivory Coast, the 2022 Qatar World Cup and beyond.

Without a mandate, could Baxter be living on borrowed time? As things stand, Baxter's contract runs until the end of Qatar 2022.

Remember, he was brought back after failing to take us to the 2006 World Cup in Germany but once again failed to book us tickets to last year's world football spectacle in Russia. I must admit, though, that Safa has been patient enough with him.

For the umpteenth time, two coaches' names touted to replace Baxter cropped up again this week, Cape Town City's Benni McCarthy and Pitso Mosimane of Mamelodi Sundowns. The name of Bidvest Wits's Gavin Hunt is also in the hat.

Safa has to map the way forward, with or without Baxter.

Looking at his assistants, it would seem the Scottish-Briton is running a one-man show. Bizarrely, even Safa technical director Neil Tovey admits they cannot tell Baxter what to do. So what is the role of his assistants? And that is for Safa to rectify.

Baxter committed a number of blunders leading up to Bafana bowing out of the tournament with a 2-1 scoreline against the Naija. See, once again I am tempted to digress to Baxter's glaring lack of tactical acumen as proven throughout Bafana's Egypt stint.

Some examples? For the Naija game, he fielded the same starting line-up as the one against Egypt. He failed in his homework, contrary to the Naija. And boy, did they plot Bafana's downfall while Baxter was still basking in the glory of the triumph over the Pharoahs.

When his 4-3-3 formation didn't work, he didn't have a plan B, forget about plan C, unnecessarily replacing Thembinkosi Lorch, his trump card striker, when Bafana needed the full attacking arsenal.

Baxter should have at least rested one of the two top forwards, maybe Percy Tau, to thwart the opposition plans, using him as a sub when the chips were down.

Tau was a marked man; he was frustrated.

In any sport, you don't do exactly what the opposition expects you to.

Another case in point: If Baxter was a coach worth his salt, he could have gathered valuable information on the Nigeria keeper, Daniel Akpeyi's weaknesses from his son Lee, who coaches the stopper at Kaizer Chiefs.

Did he make that call? Akpeyi was on holiday, Ronwen Williams was bombarded.

But again, the ball is in Safa's court. Let's see if they can play that ace they have been hiding up their sleeves.

- Bafana returned from the Afcon yesterday.