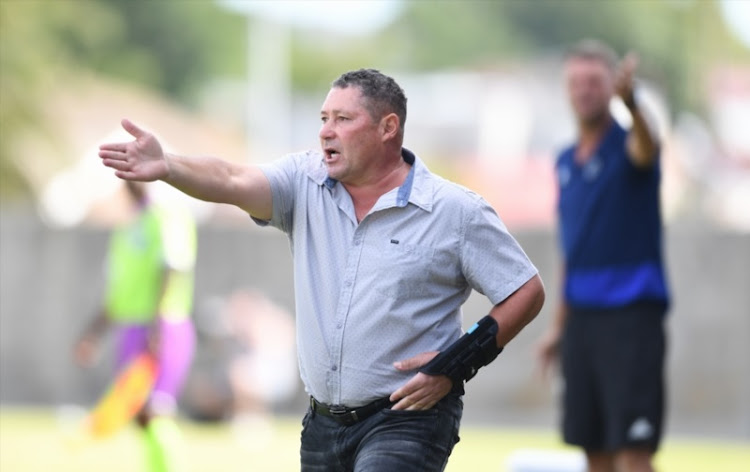 Stellenbosch FC coach Steve Barker has worked hard on finishing with his players but the newly promoted side are yet to score after their first three games in the top-flight.

Barker has admitted that more work is needed after spending more than two weeks on finishing.

“It is obvious we have to find ways to create more goalscoring chances.

"We haven’t got a goal yet‚” said Barker after the goalless draw with Maritzburg United in Stellenbosch’s first home game of the season on Sunday.

It was a first game in a fortnight for Stellenbosch‚ after losing 1-0 to neighbours Cape Town City‚ and they had used the preceding two weeks to train hard on attacking formations and ideas.

But Barker is insisting on patience as the rookies find their feet in the Absa Premiership.

“At the end of the day‚ it’s foundations that are being laid‚" he said.

Stellenbosch FC had only planned to win promotion in another two years‚ so their elevation to the Absa Premiership came as a surprise even to them.
Sport
2 years ago

“We’ve shown that we are a difficult team to beat‚ having conceded only the one goal in 270 minutes‚ in two out of three games away from home.

“It was never going to be easy‚ so I’m happy where we are.

“Obviously a player like Ryan Moon is a bit off the pace and needs to get his conditioning up to a higher level‚ and so he wasn’t really able to finish the game but we hope he will give us more.”

Moon was signed last week after being released by Kaizer Chiefs at the end of May during the off season‚ and made his debut on Sunday but without any impact.

It was a game that will not linger in the memory for long.

“The game just lacked quality in the final third although both teams had chances to get a goal‚ maybe the pitch was bit greasy‚” added Barker.

"Overall from the players‚ there was great effort‚ good commitment again.

"We showed a lot of resilience and courage.”