No keeper crisis as Bafana go to Afcon 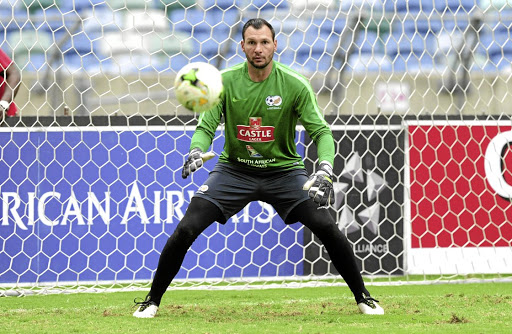 Bafana Bafana do not have a keeper crisis as we've been made to believe in the past few days following indications that Kaizer Chiefs goalie Itumeleng Khune won't recover in time to make the cut for the Africa Cup of Nations in Egypt from June 21 to July 19.

In March Bafana travelled to Tunisia for their penultimate Afcon qualifying match and came back from the battle with a stunning 2-1 victory, propelling SA into the finals with the Bidvest Wits goalie Darren Keet between the posts.

Keet was outstanding, barring the penalty he conceded. So there is absolutely no reason he should not take the Bafana No 1 spot in six weeks' time.

The fact that Keet's coach Gavin Hunt at Wits decided not to field him in the last few matches of the PSL season does not make him unprepared and unfit than he was when Bafana faced Libya and won convincingly with him proving he was ready to take on the baton from Khune.

After his showing against Libya everyone was singing the Wits goalkeeper's praises. He had a stellar game, making a string of fine stops to help Stuart Baxter's side beat the Libyans with aplomb.

Bidvest Wits coach Gavin Hunt dropped a bombshell when he revealed that No1 goalkeeper Darren Keet's decision not to sign a contract extension at the ...
Sport
3 years ago

Baxter conceded after that performance that he had his work cut out for him.

Khune has been out since January with a shoulder injury. Keet is still a Wits player and is training with the team after apparently refusing to renew his contract with the Students, a move that peeved Hunt, leading to his sidelining.

That said, I believe there is no goalkeeper crisis in Bafana. Keet must be considered the country's No 1, with Orlando Pirates' Wayne Sandilands second and Ronwen Williams of SuperSport United the third in line.

Sandilands has not had a look in by Baxter and he admits he was disappointed when he was left out for the Libya game.

Williams and Keet were named as two of the three keepers but the big shock was the call-up of Kaizer Chiefs' Bruce Bvuma, who was not even a regular at Amakhosi.

The Bucs keeper started the season on a low note when he blundered after receiving a back pass in his first official game for Pirates. The ball snuck under him for an own goal to hand Highlands Park a 1-1 draw last August.

It could also be Sandilands's moment as he has grown in confidence, becoming the darling of the Bucs faithful with Siyabonga Mpontshane, Jackson Mabokgwane and Brilliant Khuzwayo out in the cold and forever warming the bench.

Williams, on the other hand, is not new to the Bafana setup. He has deputised for Khune before and even played in some Afcon and Cosafa Cup matches, notably making his debut in a friendly against Brazil in 2014, after Khune sprained his ankle. For the past 10 years Khune has been amazing for club and country but as things stand, it looks like Williams and Keet will have to battle it out for a spot in the starting line-up for the finals in Egypt.

Many argue that the trio lack experience at international level, but experience, I counter, is gained at club level.