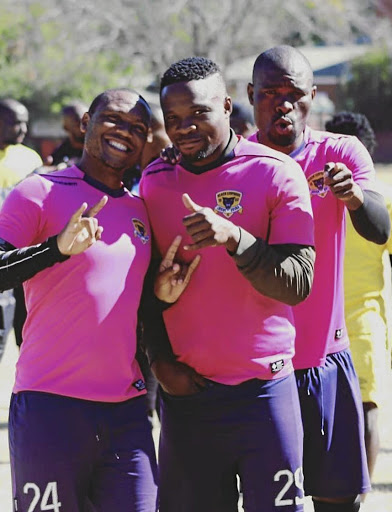 Once the highest-paid player in the history of SuperSport United, Thuso Phala, left, plays in the colours of Black Leopards this season.

When players make a move to another club, it is often because of a lucrative offer but at times it happens that they have to take a salary cut.

Although it is difficult in South Africa for players and their agents to divulge the monetary value of footballers, Sunday World can confirm that there are a few PSL players who have had to downgrade to find new homes.

A source revealed this week that Zambian international Donashano Malama, who has joined Black Leopards, was forced to take a salary cut.

"Dona was earning more than R100,000 at Chippa United and has had to settle for less. It's normal in football.

"Sometimes you have to take a salary cut, especially when you move from a big team to a small team," said the source.

Leopards' other new signing Thuso Phala is also in the same boat. The 33-year-old winger was, according to SuperSport United chief executive Stan Matthews, the best paid in the history of the club.

"I didn't expect that the best-paid player in the history of the club would be ending his career making comments on Twitter, missing training and doing things that you don't expect from a professional player," Matthews said some months ago after the two parties ended their relationship.

In finding a new club this season in Limpopo, Phala had to settle for less than he earned at Matsatsantsa a Pitori.

Still with Lidoda Duvha, it's understood that Thabo Matlaba and Mogakolodi Ngele are earning far less than they were getting at Orlando Pirates and Mamelodi Sundowns respectively.

Matlaba has been quoted as saying he refused a salary cut at Bucs, but that was mainly because he figured he was still not going to play much at Bucs if he decided to stay put.

Among the players likely to have accepted a pay cut is veteran defender Morgan Gould, who's now one of the most experienced players at newly promoted side Stellenbosch FC.