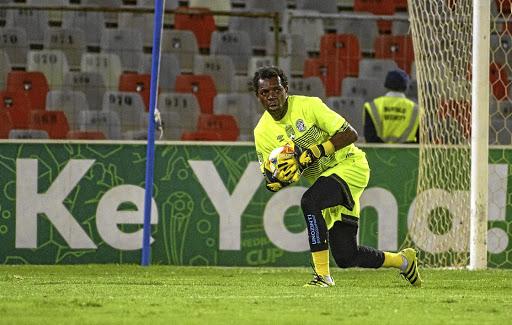 Former Bloemfontein Celtic goalkeeper Patrick Tignyemb has vowed to take the club to court for firing him.
Image: Frikkie Kapp/BackpagePix

The shenanigans that are playing out at Bloemfontein Celtic on the eve of Super Saturday, their last but pivotal game of the 2018/19 PSL season yesterday, deserve condemnation in the strongest of terms.

If it wasn't a serious matter involving club management and the players' rights to earn a decent living and put bread on the table, I would call what transpired a circus.

What with captain, goalkeeper and longest serving player, Cameroonian international, Patrick Tignyemb, being summarily dismissed without a disciplinary hearing after what management allege to be insubordination?

The 33-year-old keeper still had two years left on his contract and has vowed to take Celtic to court.

Celtic's financial woes are public knowledge and are
well-documented. Since club chairman Max Tshabalala took over, the top flight outfit has been swimming in debt, unable to pay players and staff on time.

The PSL has on numerous instances come to the rescue by dishing out loans to keep the side afloat.

As the team's skipper, Tignyemb represented the players in engaging management about all their grievances, including outstanding bonuses.

Club CEO Khumbulani Konco was on record defending the decision by him and club boss Max Tshabalala to terminate the keeper's contract by the stroke of a pen, saying it was a joint-management decision because Tignyemb was unruly and disrespectful after he stormed into a meeting and ranted abuse.

Off season is the best time to shop around.
Sport
2 years ago

Now the club could find itself in hot water if Tignyemb and the SA Football Players Union take the matter to Fifa for arbitration. And if the player wins, Celtic would have to pay him the remainder of his contract in euros or dollars.

What is disturbing in this case is that the players have had to bear with late payments of salaries, and at times not being paid in full.

Gravely so, the manner in which Tshabalala and Konco are running the club has also pit them against the club's die-hard supporters, who recently invaded the pitch.

At the beginning of the season, Tshabalala was said to be selling but it seems there were not takers with deep enough pockets to pull the club out of its quagmire.

However, what broke the camel's back was when Tignyemb approached management regarding the players' bonuses.

Players have complained of threats and being commanded by Konco, who has made the club his private fiefdom, to report for training as per their contracts or face the consequences, including disciplinary hearings, docking of salaries or fines.

This week players boycotted training in support of their fired captain, just a few days before yesterday's crucial "home game" against AmaZulu at Sisa Dukashe Stadium, in East London.

As things stand, Konco in particular, is running the club with an iron fist. And how wise of him and Tshabalala to ascertain the team is saved from relegation before cheekily throwing the "rule book", unjustifiably at Tignyemb and others.

The charlatans know they do not need the "trouble-makers" any more, despite helping the club stave off relegation. And most importantly, they can hire new, "cheap" players next season, save a few bob then start on a new slate.