Babes and Mampintsha: Are they together again? Three signs that they might have rekindled their love 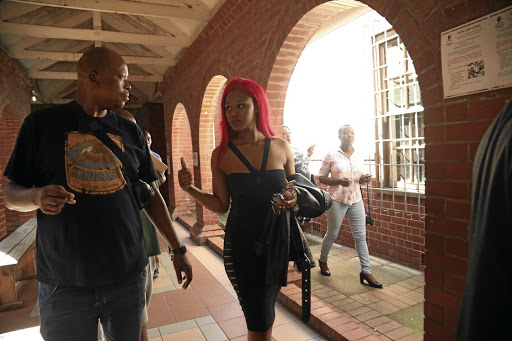 Mampintsha gets thumbs up sign from Babes Wodumo as they leave the Pinetown magistrate's court last week.
Image: Jackie Clausen

A Babes Wodumo and Mampintsha love reunion? After both appeared in court on Wednesday on charges of assault, many were shocked when the couple was referred for mediation, something they agreed to.

The state of their relationship was again in the spotlight, as many questioned whether they were back together, especially after footage of Babes dancing in court went viral.

It's reported that Mampintsha's manager said the two were back together, calling the fight, which was broadcast on Babes' Instagram page and allegedly showed Mampintsha hitting her, a "lover's spat".

"When you are in a relationship with someone and you have different personalities, things can happen... The love is real. This was not fabricated. We are not playing anyone for fools," said Lindo "Dog DBN" Buthelezi.

Team Babes denied they were back together, but here are three signs that their romance has, perhaps, been back on for a while.

Babes outraged her followers and the public when a video of her performing Mampintsha's new song, Khona Ingane Lay'ndlini, made its way to social media platforms. When questioned about whether or not they had reunited, she said she had performed the song to spite Mampintsha.

Despite denying that the couple were back on, Babes went on to feature on Khona Ingane Lay'ndlini with Mampintsha. After posting the link to the music video, Mzansi was again in an uproar, calling foul on the couple.

Shortly after the alleged abuse took place, Babes took to Instagram to call for the return of Mampintsha to the music scene. In a post in which he was tagged, Babes captioned a Big Nuz video "Please bring back Big Nuz." Mampintsha was part of the kwaito group.