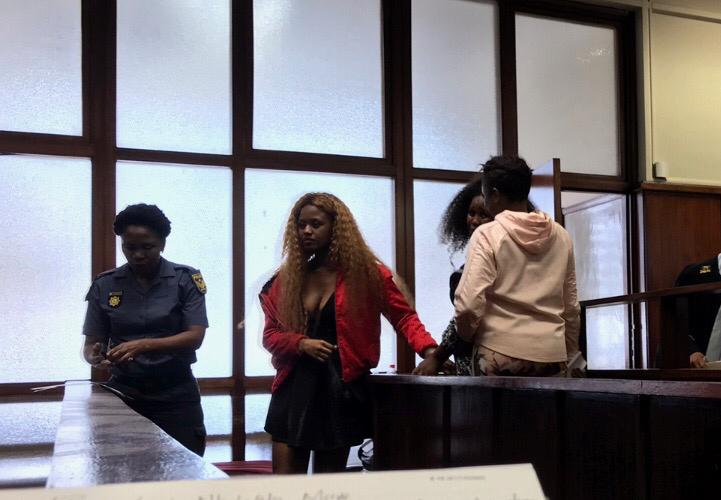 Gqom star Babes Wodumo made an appearance in the Durban Magistrate's Court on Monday. She and her sister, Nondumiso Simelane, were found guilty of contempt of court when they failed to appear on an assault charge
Image: Thuli Dlamini

Babes Wodumo and her sister Nondumiso were on Monday arrested and found guilty of contempt of court after they failed to appear on Friday to face assault charges.

Babes, real name Bongekile Simelane, was expected to appear alongside her sister Nondumiso and Thobeka "Tipcee" Ndaba at the Durban magistrate's court, after an unknown woman laid common assault charges against them at the Umbilo police station in March.

Spokesperson for the National Prosecuting Authority Natasha Ramkisson said the Simelane sisters were given the option of paying R1,000 fine or 30 days in jail. The sisters were released after they paid the fine.

“They were supposed to come to court on Friday and when they didn’t, a warrant of arrest was issued. The third lady, who I believe is a celebrity named Tipcee, produced a doctor's note which the court found to be valid. I am not sure if they turned themselves in to the police or if they were arrested at a different location," Ramkisson said.

Last week, Nondumiso told our sister publication Tshisa Live that they had car problems and were unable to get to court on time.

The assault case came days after Babes' musician boyfriend Mandla "Mampintsha" Maphumulo was arrested for the assault of the Wololo hitmaker.

The video, which captured "Mampintsha" slapping Babes, went viral across social media platforms. He was released on R2,000 bail and opened a counter-charge of assault against his girlfriend.

'' Queen of Gqom '' #babeswodumo has entered the Durban Magistrates court. She's appearing after she failed to present herself in same court on Friday. #sabcnews pic.twitter.com/bJjouVg5Cf

Wodumo fails to appear in court
Lifestyle
2 years ago

A warrant of arrest has been issued for gqom star Babes Wodumo after she failed to appear in the Durban magistrate's court on common assault charges ...
Entertainment
2 years ago
Next Article