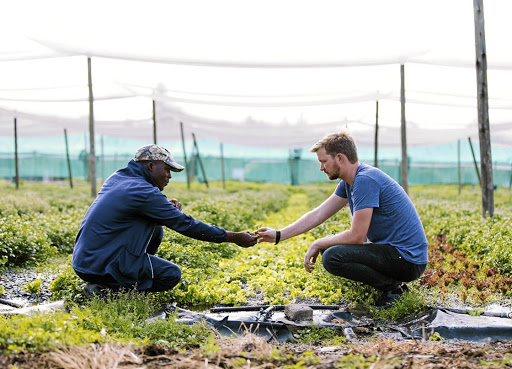 Urbanologi aims to source its ingredients within a 150km radius of the eatery.
Image: Supplied

It's quite possible to fall in love with butter. All it took was an unassuming dollop of the stuff sitting on the edge of a bread board.

This was no ordinary butter, it was lemon-infused butter.

It became a culinary experience when smeared onto thinly sliced bread and eaten with or without a sprinkle of salt.

Where was this heavenly butter? you ask. It was on offer at Urbanologi, a quaint eatery in a refurbished hippie district of Joburg on Fox Street. The restaurant is inside Mad Giant brewery.

Just like the local brew they offer, they've decided to keep everything local.

The restaurant aims to source its ingredients from within a 150km radius. This is largely in a bid to reduce the restaurant's carbon footprint.

"If we keep our current food habits we will not survive. Food waste is one of the biggest contributions to greenhouse gasses that we know of. That's just the tip of the iceberg. Consider how much emissions we emit transporting food from one source to another," says Urbanologi's executive chef Jack Coetzee.

"This is where the 150km radius comes in. By sourcing closer you are reducing the emissions used to get your produce to the kitchen. You are supporting local farmers who employ local people and those people support families. It's a momentum game in which every little contribution counts," he clarifies.

The chef, who's been at Urbanologi for a little over two years, cautioned that sometimes even people with the best intentions can do harm, so he does as much research to avoid harm.

"What I also wanted to consider was happy ecosystems.

Restaurant with the best view in town

Gratitude gives patrons a taste of the good life.
Good Life
2 years ago

"In Dan Barber's book The Third Plate, he writes about how the rise in vegans and vegetarians have spurred on the demand for tofu, which comes from soy beans. To meet these demands they have developed a strain of soy bean resistant to Roundup [weed killer]. Once sprayed, Roundup kills all the weeds and increases yields.

"But what it also does is wipe out all the insects that feed off the weeds and effectively wipes out the bottom third of the food chain. Added to this the run off gathers in the Mexican Gulf where there is now a dead spot the size of New York state where nothing can inhabit.

"This was crazy for me because this was caused by people with only the best intentions. So, before we use anything we consider as best we can see how this will affect the whole ecosystem," he concludes.

The food is sourced from farms in Suikerbosrand, Bapsfontein, Randfontein and Midrand, among others.

All the food we were offered was delicious, but a definite standout was the spider steak served with charred leeks, roasted garlic and labneh.