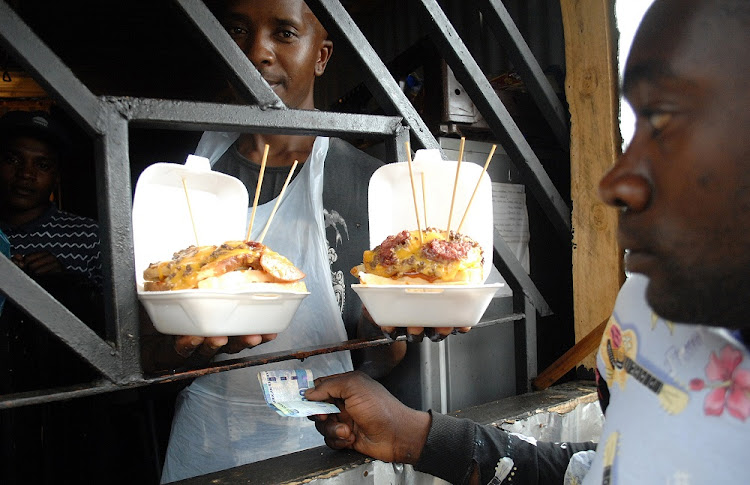 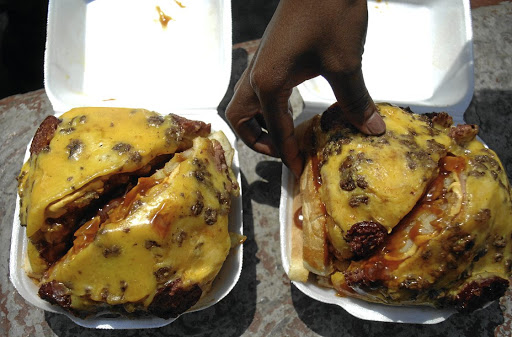 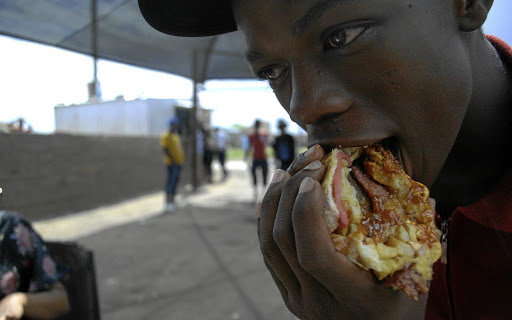 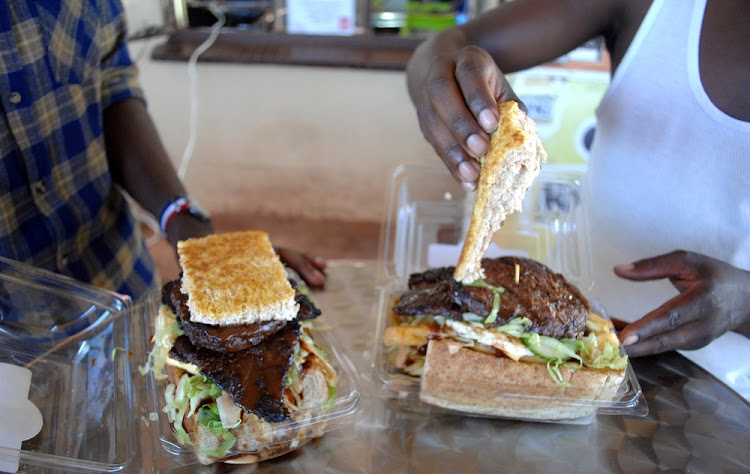 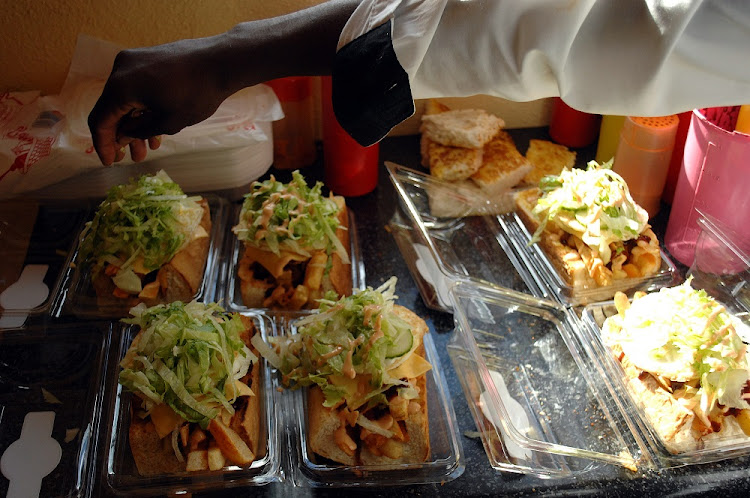 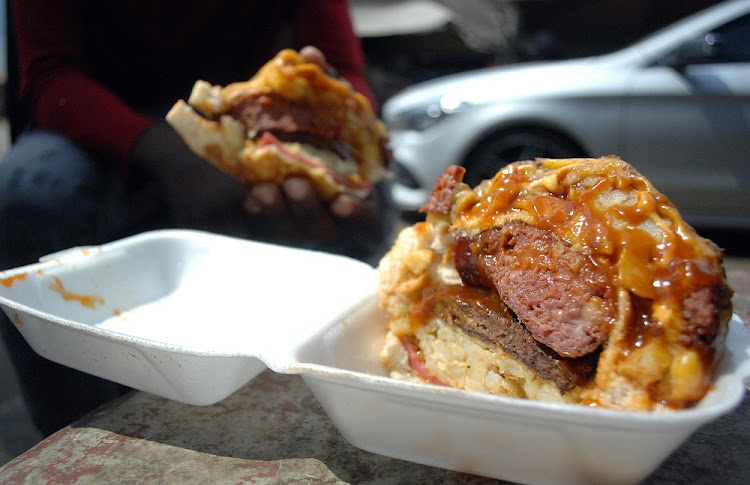 They say the food you never eat haunts you. After seeing an image of a stacked kota drenched in cheddar cheese and garnished with pepperoni-like meat (which I later found out is some Italian sausage) floating around on social media I decided to exorcise that ghost.

Tracking the uploads on social media revealed this ode to cheese and all things greasy was in Daveyton, Ekurhuleni.

After asking myself WWABD? (What Would Anthony Bourdain Do?), a photographer and I rushed to Daveyton to see this behemoth.

On arrival, we found the young man behind the famed Daveyton kota, Abraham
Mdlalose. The soft-spoken humble man describes himself as "an innovative person who loves to meet and interact with new people".

And innovative he is.

Mdlalose started his kota business two years ago in a bid to raise funds for his education. He had dropped out of his food science course in second year at the Tshwane University of Technology due to financial difficulties.

He says he doesn't use any pork products or chicken polony in his kota but he does use chicken fillets. Other meats on the menu are French polony, beef sausage and beef patties. Mdlalose also makes his own sauces.

Despite a lack of funds, Mdlalose started his business. He works out of a tiny shiny shack, opposite the famed East Rand hangout Pule's carwash and shisanyama.

The 27-year-old made us his famous pizza-style kota which goes for R40. The kota is heavy, crammed with sausage, beef patty, chips and polony. The top oozes cheese and is covered with slices of sausage to give it that pizza top look.

Why Cook duo a sizzling success.
Good Life
3 years ago

It's a greasy monster that oozes as you clench it in your fist. I opted to slice it and it stayed delicious. It's also a lot of food, ideal as a hangover cure after a wild night out but not something that should be consumed on a daily basis.

One of the drawbacks of Daveyton's popular kota is that it takes a while to get ready. Mdlalose has a small team of four working in an even smaller space, and the ingredients used take a bit more time to prepare. So you do wait a while for your order.

From the East Rand, our social media kota treasure hunt took us to Soweto, Protea Glen Ext 13 to be exact, where we met Rhulani Shibambo, the owner of Kota King.

Shibambo's family had a spaza shop, but after taking it over the 24-year-old came up with the Kota King concept.

He studied food and beverage management at the International Hotel School in Sandton. He's worked at the Reef Hotel and in catering. 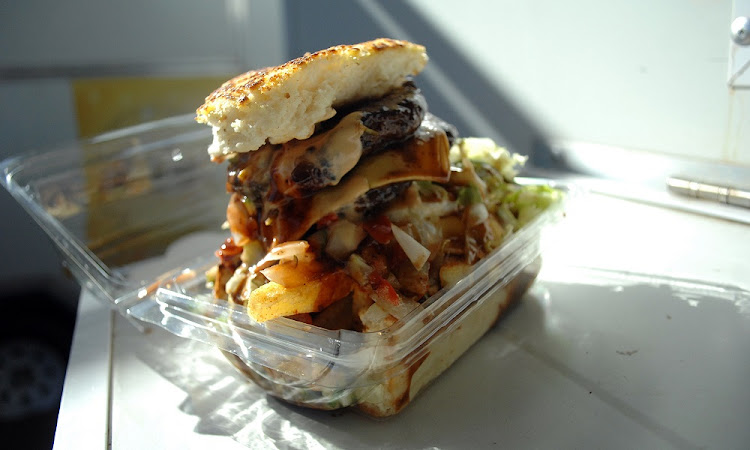 "I had to prove to my father that I can manage [the shop]. I had to rebrand and introduce new things."

That was in 2015, and today Rhulani largely relies on social media to advertise his business. His spot boasts outside furniture, and orders are placed from a window.

Then, standing at the window, an impressively named order - King Silas - caught my eye. It is chips, egg, cheese, cucumbers, lettuce with rump steak, smothered in the King Kota signature sauce sitting on a bed of either brown or white bread. This king-size kota is finished off with a slightly toasted top.

We spoke about how he made his kotas and how the recent listeriosis scare affected business.

"It did affect us negatively but we didn't sit back and say listeriosis has affected us and that's all. We had to come up with new strategies and that's when we started introducing amakota with chicken fillets, your rump steak and beef patties to replace our polony, and other cold meats."

The new direction proved popular with customers and they came flocking to his establishment to get a taste of his new ideas. Shibambo still sells cheaper kotas with polony and Russian. 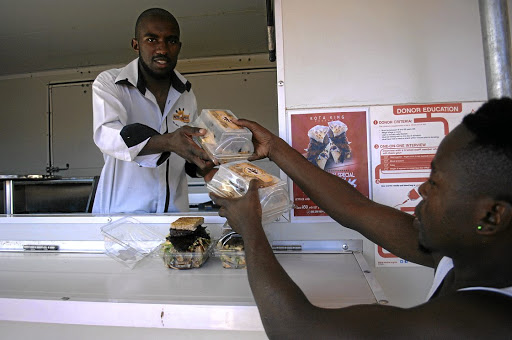 "What sets us apart from everyone is our signature sauce... and also the passion, the love with which we make the food. It takes time to prepare and we put a lot of effort into it."

He has a team of six working for him, and his brothers join in at times. Shibambo also delivers and also does pop-ups events in Soweto.

Despite loving the look of King Silas, I ordered King Double instead - with double beef patty, double cheese, chips, lettuce, cucumber and egg.

Kota King signature sauce really made the kota visually appealing from those I've tasted before. It was relatively light, but still a lot of food. The kota tasted like an elaborate sandwich, but very tasty.