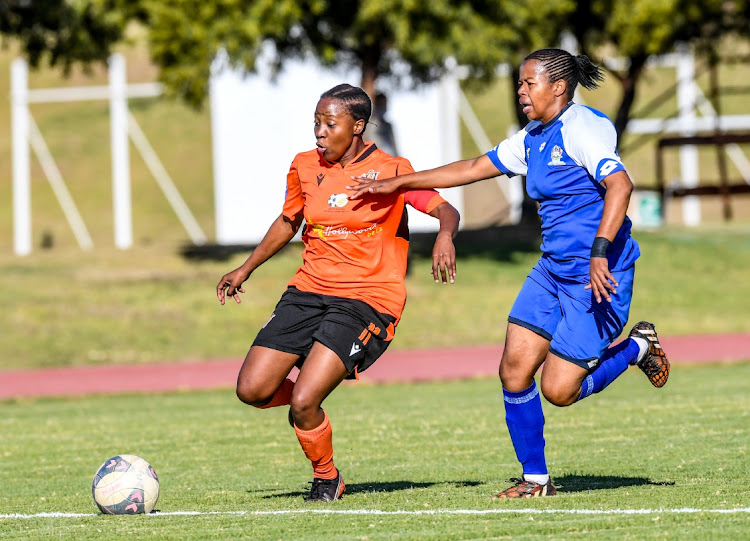 Refilwe Maseko of UJ on the offensive and scores a goal and celebrate with teammates during the Hollywoodbets Super League match between University of Johannesburg FC and Durban Ladies FC at UJ Stadium on May 29, 2021 in Johannesburg.
Image: Sydney Seshibedi

The University of Johannesburg are hoping to recover from their slow start in the Hollywoodbets Super League after a round of six matches.

UJ are in eighth place with eight points from six matches as they trail log leaders Mamelodi Sundowns by 10 points.

Coach Kgabo Ditsebe admitted that he was not happy with their start to the league campaign. At the weekend they defeated Durban ladies 3-1 at the Soweto campus to register their second league win of the season. Jessica Wade's brace and a goal by Refiloe Maseko helped them defeat the KwaZulu-Natal outfit.

Their next game is away to the University of the Western Cape (UWC) in Cape Town on Saturday at 3pm.

“It is not the start that we wanted, as we want to be much closer to the leaders. We dropped many points and we find ourselves 10 points off the pace. We need to stay within touching distance of the leading pack,” Ditsebe told Sowetan yesterday.

Ditsebe said they are facing a tricky UWC team in Cape Town at the weekend and he hopes that they will pick up the three points.

“UWC have a great team and they will be no pushovers. We expect a tough game and it will be difficult.”

He added that his biggest challenges were injuries, suspensions and the lack of availability of his players as most of them are working.

“If we can manage to pay the players salaries and have a full-time professional league we will solve the problem.”

Hollywoodbets league to pay R2,000 for players of the match
Sport
6 months ago

Mamelodi Sundowns Ladies maintained their 100% record in the Hollywoodbets Super League with an emphatic 4-1 victory over rivals Tshwane University ...
Sport
6 months ago
Next Article