History as women's league gets a sponsor 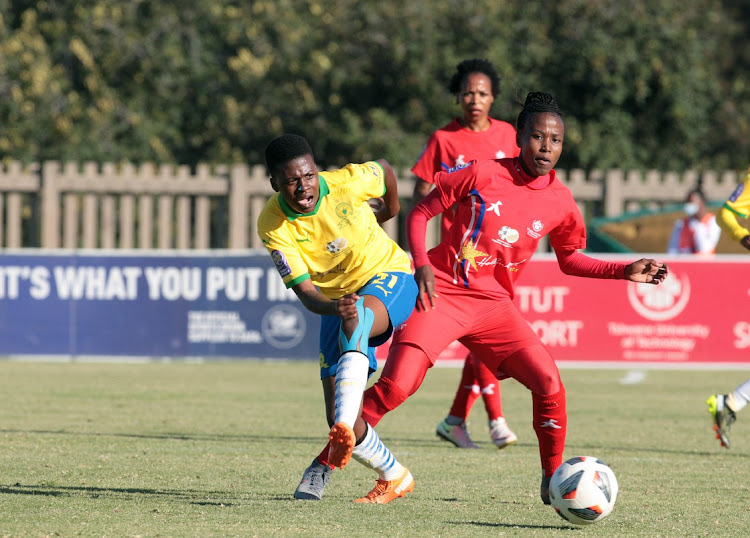 Nonhlanhla Mthandi of Sundowns and Mapula Kgoale of TUT during the Hollywood Bets Super League match between TUT and Mamelodi Sundowns at TUT Stadium in Pretoria.
Image: Veli Nhlapo

Mamelodi Sundowns Ladies maintained their 100% record in the Hollywoodbets Super League with an emphatic 4-1 victory over rivals Tshwane University of Technology at TUT Stadium at the weekend.

The defending champions claimed Tshwane derby bragging rights on a day that the SA Football Association announced a headline sponsor for women's league. A brace by Melinda Kgadiete and goals by Chuene Morifi and Daweti Boitumelo helped Sundowns to register their fourth successive league victory.

Sundowns took a 3-0 lead at half-time and never looked back as they ended the game as a contest in the second half.

Morifi said the new sponsorship has breathed fresh air into women's football. “We’ve been praying to get a sponsor to come and invest in women's football. It has been a long time coming. I am happy to be on the score sheet and this will boost my confidence going forward," she said.

Sundowns coach Jerry Tshabalala said his team played the best football since the start of the new season.

“We had a problem with finishing in the first three games, but we were clinical in the derby. We played our best game in the derby. We put the ball behind their defence and unlocked them. It's still early to tell who will win the league and we are taking it one step at a time," said Tshabalala.

Meanwhile, Surprise log leaders First Touch hammered Durban Ladies 4-0 to maintain their unbeaten run in the league. They remained at the summit of the log, thanks to their superior goal difference over the champions.

Banyana Banyana coach Desiree Ellis could not contain her excitement after drawing Mozambique in the women Africa Cup on Nations qualifiers this week.
Sport
1 year ago
Next Article