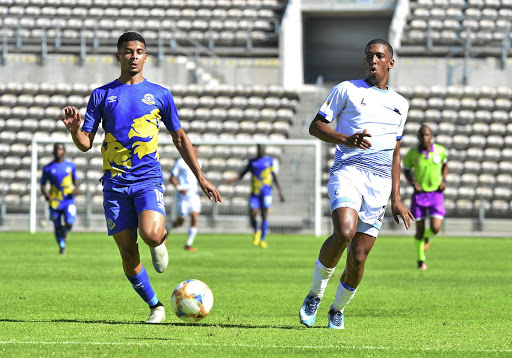 Naeem Amoojee of Tshakhuma Tsha Madzivhandila could soon find himself paying for new bosses as his club is on sale. On the right is Nathan Gertse of Cape Umoya United. / Grant Pitcher/Gallo Images

Tshakhuma Tsha Madzivhandila (TTM) could soon be history in the GladAfrica Championship.

Sowetan has been informed that ABC Motsepe League sides Passion FC from Mpumalanga and Venda Football Academy are potential buyers for the first division side who put up for sale signs two weeks ago.

Also, a businessman in the medical field in the North West who didn't want to be named, has also shown interest to buy the club . North West has no team in the top flight since the demise of Platinum Stars a few years ago.

TTM spokesperson Tshidino Ndou said one of the potential buyers has already been given paperwork and a deal could be concluded before month-end.

"We've met one of the potential buyers," Ndou confirmed.

"We've sent the buyer an offer to purchase to have a look at it, sign and return to us."

Interestingly, Tshakhuma revealed they needed the money to fund their ambition to buy a Premiership status.

"So, once it [TTM] is sold, the money will be deposited into the Premiership team that is selling the status to us," Ndou said, without revealing which PSL club he is referring to.

For-sale signs could be up at first division side Tshakhuma Tsha Madzivhandila (TTM) due to the Covid-19 pandemic.
Sport
2 years ago

Ndou also confirmed the interest from Mpumalanga, but said he was unsure if it was from Passion representatives.

"He was calling us in the past few days and said some of the games will be played in Thohoyandou if he buys the team and some in Mpumalanga," Ndou continued.

"Our prices are different, there is a R10m offer from a buyer in Limpopo. If someone takes a team out of the province then it has to be for R12m.

"The guy who we've sent the offer to purchase wants to beat the other bidders, so is he is offering more than R12m. He made a good offer and he is very serious to buy this status. I won't mention his name."

Lucas Mudau, the CEO of Passion which is based in the town of Caroline, could not confirm or deny if they are in the process of buying TTM.

"The truth of the matter is that things will change, but as to which direction I can't confirm right now," Mudau said.

"Honestly speaking, I don't have anything that I can confirm with you but we are hoping for a move somewhere somehow."

TTM will not win the NFD but have a chance to finish with a berth in the promotion playoffs, in the event of the current season being played to finish. That should count for added value for TTM in the market for club buyers.