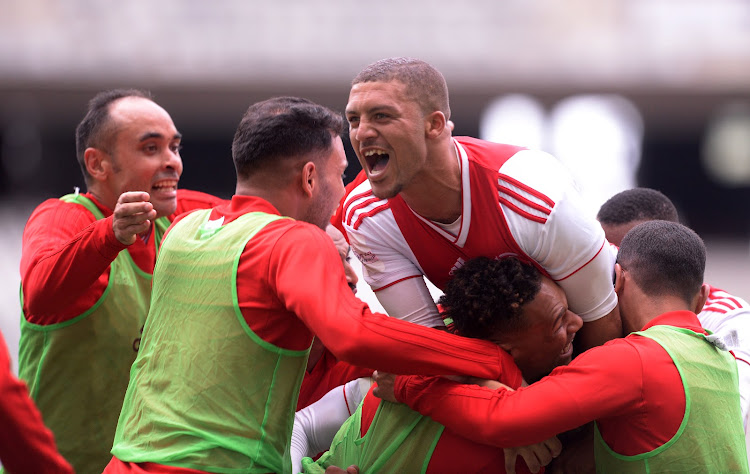 Ajax Cape Town players celebrate after winning a match. The Urban Warriors are on a mission to gain promotion.
Image: Ryan Wilkisky/BackpagePix

Right-back Thendo Mukumela scored just two minutes from time to hand Ajax Cape Town a precious victory at the weekend‚ which puts them now within touching distance of automatic promotion back to the top-flight.

This‚ though‚ as the GladAfrica Championship (National First Division) has also been plunged into uncertainty over its immediate continuation by the Premier Soccer League’s decision to suspend all the coming midweek and weekend matches.

The PSL board of governors meet on Thursday to decide whether Absa Premiership and GladAfrica games scan be played behind closed doors‚ or whether to suspend the leagues after President Cyril Ramaphosa’s national emergency regarding the coronavirus pandemic.

Ajax’s last-gasp 1-0 triumph over TS Galaxy at Cape Town Stadium on Saturday was made even sweeter for the Cape side by the fact their three closest rivals all failed to win and increase their lead to seven points.

Second-placed Swallows and third-placed Uthongathi drew 0-0 at Dobsonville Stadium while fourth-placed Tshakhuma Tsha Madzivhandila were beaten away at JDR Stars.

Ajax have 48 points with six games to go with Swallows second on 41‚ Uthongathi on 40 and TTM on 38.

The second and third-placed finishers advance to the end of season promotion-relegation playoffs.

“We must just keep getting our points‚ we mustn’t worry about what the other teams are doing‚” said Ajax coach Calvin Marlin.

“They can keep winning all their games but as long as we are picking up all our points‚ we don’t have to worry about them.

“We must not think we can relax now that we have a seven-point lead. No such thing‚” he warned.

“The quicker we can wrap this league up‚ the better for us‚” he added.

“If we keep putting the performances in‚ staying consistent‚ we can get the results.”

Marlin said it had been a tough game against last season’s Nedbank Cup winners‚ who are down in 12th place.

“They were different to how I thought they would play.

“ I thought they’d be a bit more attacking but it was typical of teams who come to Cape Town; they want to close the lines and catch us on the counter attack‚” said Marlin.

“We created enough chances in the first half to score which would have made life a lot easier.”

The PSL faces a minefield regarding their promotion/relegation system‚ including the May-June playoffs‚ should the Premiership and NFD be suspended.

Among president Ramaphosa’s emergency measures declared on Sunday was a prohibition of gatherings of more than 100 people‚ which affects all the major professional sports.

France international Eliaquim Mangala said that he is one of the five players and staff of La Liga side Valencia who have tested positive for the ...
Sport
1 year ago

Manchester City's appeal against their two-year UEFA ban from European football is up in the air as the Court of Arbitration for Sport in Switzerland ...
Sport
1 year ago

PSL postpones fixtures due to coronavirus

Following a meeting of stakeholders on Monday, it was unanimously decided to suspend the Premier Soccer League (PSL) programme until further notice.
Sport
1 year ago
Next Article