R8.5m contract at centre of dispute between mining authority and company 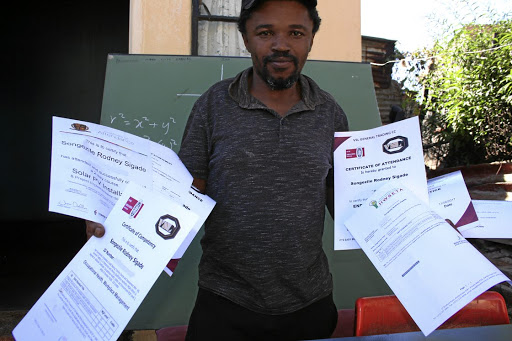 Songezile Sigade is one of 80 unemployed youth who were trained in a six-month skills development programme./Isaac Mahlangu

The quality of a six-month skills training programme given to 80 unemployed youth at a cost of R11m has been brought into question.

The Mining Qualifications Authority (MQA), a sector education and training authority (Seta), funded the learnership programme that is now the subject of a dispute over payment between it and a service provider.

VSL General Trading which provided the skills training at a cost of more than R100,000 per student is embroiled in a bitter feud with MQA over nonpayment of an outstanding R2.8m.

The company provided training to 80 unemployed youth from Khuma township near Klerksdorp in the North West.

But a report by the authority's monitoring and evaluation unit, which Sowetan has seen, has painted a worrying picture on the quality of the skills training
received by learners.

The report by the unit recommended that a payment of R2.8m not be made as participants in the course would not be getting credit-bearing certificates and that objectives had not been met.

According to a service-level agreement entered into with VSL, the skills programmes to be undertaken included Solar PV feasibility assessment for both residential and industrial including installation, maintenance and financial programmes among others.

He confirmed that there was a payment dispute with MQA which still owed his company money.

When asked about the attendance certificates given to the participants, Leponesa said his company had "ups and downs" with a service provider it had outsourced to train on solar installations that it found out was not accredited.

"We had ups and downs with the service provider, then we said because we needed to give them something accredited, then we would get the one [accredited training] for plumbing," he said.

"From [the service provider appointed to render training on solar systems] I can agree [that they got attendance certificates] that's why we said we need to put more effort to take them [students] to the construction Seta.

"There's an issue that they [MQA] don't want to pay the remaining amount because of the back and forth, but we didn't want to entertain it to the lawyers"

MQA board chairperson David Msiza told Sowetan the VSL contract was among three contracts on learnerships and internships it would soon launch investigations on. "The MQA board will do so expeditiously and will take immediate remedial steps should it identify any irregularities regarding these contracts."

Deloitte auditor Chetan Vaghela told the state capture inquiry on Tuesday that an investigation found Neotel bosses breached their authority and did ...
News
3 years ago

JSE-accredited sponsor River Group has given Gupta-family owned Oakbay Resources and Energy notice it intends dropping its account. “The reason for ...
News
5 years ago

Here's how radio and television mechanic trace defects and do repairs

Radio and television mechanics trace defects and repair radios and television sets which may be defective for various reasons.
SebenzaLIVE
3 years ago
Next Article