'I never asked for this. What you are talking about?': Middendorp reacts to question about AmaZulu loss 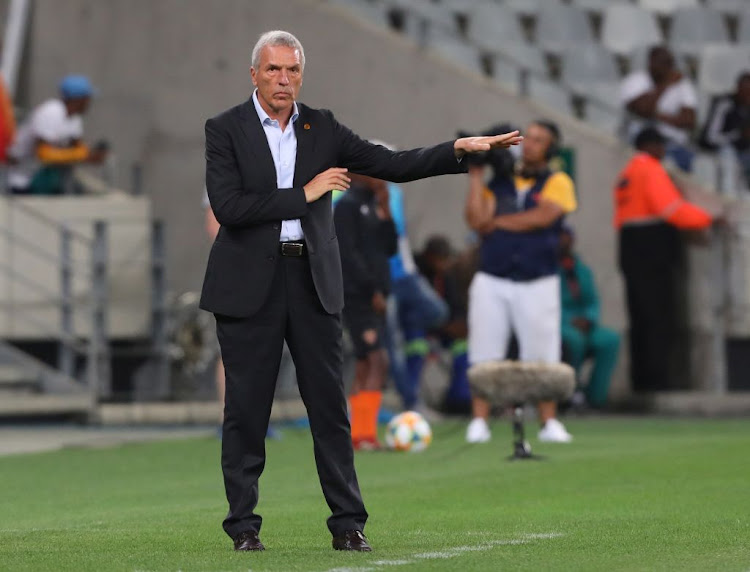 Ernst Middendorp has said that, as he did not get over-excited about a Soweto derby victory last week, he was not overly concerned by a 1-0 defeat to last-placed AmaZulu by his league-leading Kaizer Chiefs on Saturday.

However, a shock for the top team in the Absa Premiership by the bottom side at FNB Stadium does continue the concerns over Chiefs' growing inconsistency that appeared to be dispelled by their 1-0 win against Orlando Pirates the weekend before.

It would appear to raise questions about their title credentials, especially now that Chiefs' most credible threat, second-placed defending champions Mamelodi Sundowns, have been freed of competing in the Caf Champions League following their 1-1 second leg draw – for a 3-1 aggregate defeat – against Al Ahly on Saturday.

It was put to Middendorp that as much as he was praised for his tactical decisions in the win against Pirates, such a poor performance against the bottom-placed team raises questions again about the credentials of Chiefs’ attempt to reverse four seasons without a trophy in their 50th anniversary season.

“No, I don’t need this [the praise]. I never asked for this. What you are talking about?” the coach responded. “I am quite realistic at any time and I keep the balance. I am not running around celebrating.

“If you think about this, this is totally unfair [questions being raised]. I have been very clear last week that it was not the decider, nothing to celebrate.

“And then I said it, yes we have seen quite a confusing team today on our side. It’s not unusual. You have this big event [the derby] just past successfully, and I spoke the entire week about trying to get consistency.

“We changed only one position [Siphosakhe Ntiya-Ntiya coming in at left-back]. The other one was forced by injury [Anthony Akumu for Willard Katsande]. We tried to put the same players, trust them, hoping they would top it up with a good game.

“There’s no doubt about it, we have seen an absolutely confusing game individually and as a collective.

“The question mark is: how can this happen? Of course it has something to do with the mindset. It’s the same with the teams who have won against Liverpool, Norwich winning against Leicester.

“It should not happen. I believe if you have the right mindset on the field from the first second from the attacking end and defending, the result will be different.

“And we have not done that. We took it too easy. And then, of course, in a critical moment [you concede] and it becomes more difficult.”

Chiefs (48 points from 22 games) could have gone to a 10-point lead over Sundowns (41 from 20) with a win against the wooden-spoonists, who had put head coach Jozef Vukusic on special leave during the week and were playing under caretaker Ayanda Dlamini.

That would have put Downs under pressure to win all six points from their two games in hand just to be four points behind Amakhosi.

Now the Brazilians can go to a point behind the leaders if they convert those games into victories, and the advantage gained from Chiefs' win against expectations against Pirates is undone to some extent.

AmaZulu moved off the bottom to 15th place from their valuable three points. Chiefs meet sixth-placed Bidvest Wits next at FNB on Wednesday, March 18.