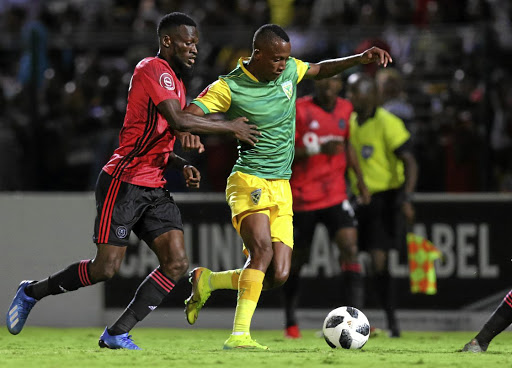 Orlando Pirates coach Josef Zinnbauer feels finishing in the top three would be an achievement for the Buccaneers.

Before their loss to their traditional foes Kaizer Chiefs nearly a fortnight ago, many fancied Pirates' chances in the title race. But now it's a different story, especially after their goalless stalemate against Golden Arrows in Durban at the weekend.

With Chiefs losing to AmaZulu on Saturday, a win for third-placed Pirates would have increased their chances to mount pressure on Amakhosi.

With seven games to spare, Zinnbauer is already planning for next season, but finishing inside the top three remains the German's main goal. He feels this would be an impressive feat, hinting that campaigning in the CAF Champions League excited him as well.

"The focus is really on next season. The target is to have a good squad for next season. This season, if you give me a place in the top three, I will take it. I can also fancy playing [in the] Champions League... it's good, but it not easy."

Orlando Pirates got a lucky let off late in the game but still came away with only a point at Lamontville Golden Arrows at the Sugar Ray Xulu Stadium ...
Sport
2 years ago

Without giving much away, the Bucs mentor sounded like he's already looking to bolster his squad ahead of the next term.

Players such as Maritzburg United goalkeeper Richard Ofori and Black Leopards' ace Lesedi Kapinga have been linked to the Sea Robbers.

"For us it's important to create more competition in the team, to have an improved squad next season," he said.

Bucs' campaign will get more trickier when they face defending champions, Mamelodi Sundowns, who are second on the log, on March 17.

In the first round of the season, Pirates beat the Brazilians 1-0 in what was Zinnbauer's fourth game as the Bucs' coach in January.