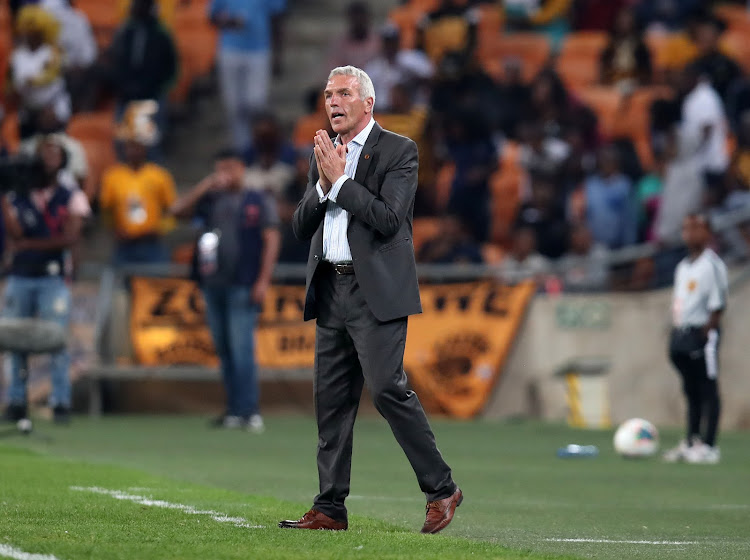 Kaizer Chiefs coach Ernst Middendorp is well aware that nothing less than the Absa Premiership title will be acceptable by the club's supporters and management.
Image: Muzi Ntombela/BackpagePix

Kaizer Chiefs had the wrong mindset‚ coach Ernst Middendorp said after his Absa Premiership leaders’ 1-0 shock at the hands of last-placed AmaZulu on Saturday‚ alluding to Amakhosi not adjusting to the comedown from a Soweto derby win the week before.

There was always a danger Chiefs might struggle – coming off a pulsating‚ though at times also fortunate‚ 1-0 win against Orlando Pirates at a packed FNB Stadium two Saturdays ago – to contend with the comedown of meeting bottom side Usuthu.

Amakhosi might have hope that the tangible scent of a league title – having confounded predictions of cracking under pressure with the win against Pirates – would be the carrot that kept up the intensity up against AmaZulu.

Instead‚ with a static line-up put out by Middendorp‚ Chiefs were flat.

They had no real ingenuity in their gameplan‚ little individual creativity and practically nothing in the way of dynamic passing movements or combination play to break a resolute but unspectacular Usuthu down.

Middendorp blamed the defeat and a poor performance on the comedown.

“We have definitely not picked up a huge opportunity to make a step into the right direction‚” the coach admitted.

“As you see all over the world‚ such games you are only able to handle properly if your mindset is in the field. We definitely had a lot of moments where it was just too casual.

“A huge opportunity too‚ in front of the goalkeeper [by Leonardo Castro in the first half] and we missed the chance of going to 1-0.

“And then in the critical stage‚ with five minutes to the end of the first half‚ just not seeing the blind side‚ with enough time to track the player [for Bonginkosi Ntuli's 44th-minute strike].

“These are all moments that make it difficult going into the second half‚ where you play against a wall.

“And then every minute delayed you are not finding any passing combinations any more. In the end it was quite a confusing game from our side.

“Compliments to AmaZulu‚ but I think we will definitely assess this game and prepare for Bidvest Wits on March 18.

"But hopefully we will have another mindset on the field.”

Chiefs meet sixth-placed Wits next at FNB on Wednesday‚ March 18.

They may perform magic with the ball on the soccer pitch but evidence shows many of our star soccer players lack the basic skills to manage their ...
Business
2 years ago

New Black Leopards coach Alan Clark has felt the tension of relegation danger before but says his side are free from any the stress of the possible ...
Sport
2 years ago
Next Article