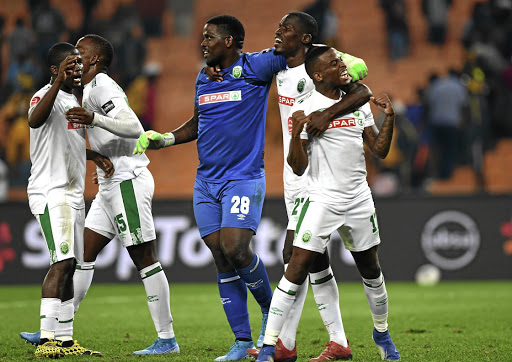 AmaZulu players celebrate with their keeper Siyabonga Mbatha after he kept a clean sheet against Chiefs.
Image: Gallo Images

Stand-in AmaZulu coach Ayanda Dlamini is a hero after guiding Usuthu to their first win over Kaizer Chiefs since 2007, boosting their survival hopes in the process.

The 1-0 win courtesy of Bonginkosi Ntuli's strike didn't just end Chiefs' 13-year long dominance over Usuthu, but it also propelled the Durbanites to the calmer waters, moving off the bottom of the table to position 15 on 23 points from 24 outings.

Having just been roped in on a caretaker basis at the start of last week following the club's decision to suspend head coach Jozef Vukusic, many had predicted that Dlamini was going to be baptised with fire by Chiefs.

However, the former striker, who'd been coaching the team's MultiChoice Diski Challenge, achieved the unthinkable, beating Chiefs in his first game in the PSL.

Admitting no one had given them a chance to outshine Amakhosi, Dlamini, 35, attributed their crucial victory to keeping things simple.

"It's a good win, we needed it badly ... we were desperate for it. In the situation we're in, I told the boys it didn't matter that we were playing Chiefs. It was important to introduce a system that the boys would understand easily ... I told them to keep it as simple as possible, just play the ball, keep possession and I think it worked."

The last time Usuthu beat Chiefs before Saturday was in March 2007, outwitting them 2-1 through a Lucky Mzizi brace. Ernst Middendorp was in charge of the Soweto giants in his first stint at Naturena.