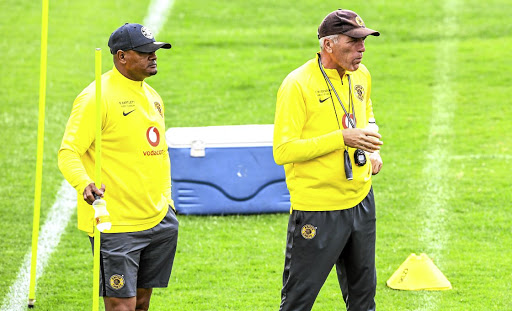 With the suspension of three of his regulars in Mulomowandau Mathoho, Daniel Akpeyi and Willard Katsande for their Telkom Knockout semifinal encounter against fellow high-flyers Maritzburg United at Mbombela Stadium on Sunday [3pm], Middendorp has implied he utilised the latest Fifa hiatus to prepare their fringe players.

"It [the Fifa break] is always a chance to look into settling or assembling or try to find out who should be an addition, probably to be available," said Middendorp at the Chiefs' media open-day at their base in Naturena yesterday.

"We looked at what are the options. how far is [Siphosakhe] Ntiya-Ntiya, how far is the young guy [Nkosingiphile] Ngcobo, how far is Njabulo Blom to use him, to watch him on the training and to watch him play in the Diski team. to see which players can jump in."

SA's Olympic hopes not over

Egypt's win over SA was marred by a number of poor decisions by Senegalese referee Daouda Gueye, with the most controversial one being the penalty ...
Sport
1 year ago

The Amakhosi mentor also confirmed that all his players who were on national duty with their respective nations had returned injury-free. Mathoho [Bafana], Akpeyi [Nigeria], Lazarous Kambole [Zambia] and Khama Billiat [Zimbabwe] turned out for their countries during the international window of games.

"From the injury side, good so far. players we have are healthy," he said.

Middendorp also hinted that Kearyn Baccus, who missed the team's last four games across all tournaments through a groin-related injury, could walk straight into the starting XI on Sunday, especially with the unavailability of Katsande.

"There's a good direction in terms of Kearyn Baccus in particular being back, fully available for selection,'' said Middendorp.

The German may have had two spells at Maritzburg between 2009 and 2014 but he doesn't think his history with the club will count on Sunday, feeling the team have changed completely.

"They've quite had a good turnaround in terms of the setting up, in terms of the players. A lot of players from Thabiso Kutumela, Siyanda Xulu [who's out injured], [Richard] Ofori, I haven't worked with them, so they look a totally new side and my experience with them won't come into effect," stated the Chiefs coach.

Bartlett confident they can deliver without Mathoho
Sport
1 year ago

Kaizer Chiefs have pronounced that Itumeleng Khune is “fully fit”‚ perhaps opening the way for the Bafana Bafana goalkeeper to be between the posts ...
Sport
1 year ago

Bernard Parker will be out to preserve his 100 percent scoring record in cup matches against Maritzburg United when Kaizer Chiefs meet the ...
Sport
1 year ago
Next Article