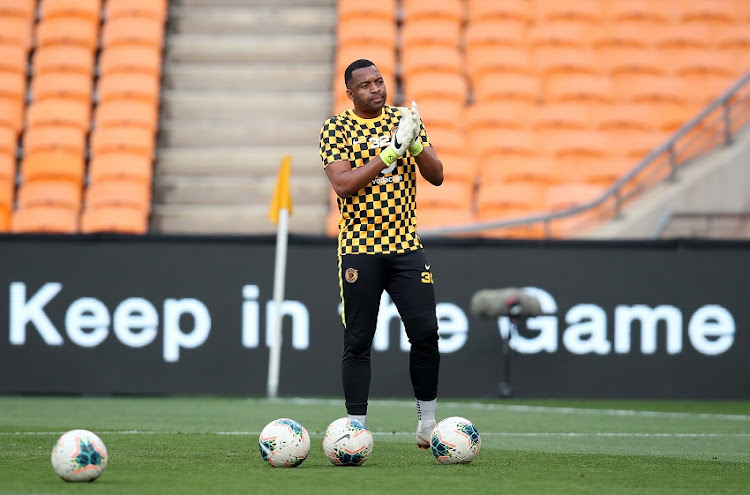 Itumeleng Khune of Kaizer Chiefs during the Absa Premiership 2019/20 match between Kaizer Chiefs and Supersport United at the FNB Stadium, Johannesburg on the 24 August 2019.
Image: ©Muzi Ntombela/BackpagePix

Kaizer Chiefs have pronounced that Itumeleng Khune is “fully fit”‚ perhaps opening the way for the Bafana Bafana goalkeeper to be between the posts in Sunday’s Telkom Knockout semifinal against Maritzburg United.

With in-form Nigeria international Daniel Akpeyi suspended it has been presumed all week that understudy Bruce Bvuma would take the gloves at Mbombela Stadium in a huge match for Amakhosi‚ as they seek to overturn an unprecedented four seasons without a trophy.

Chiefs‚ though‚ surprisingly announced on their website on Friday morning that Khune – who coach Ernst Middendorp had indicated was not quite yet ready to play‚ and who seemed more preoccupied with a sensational marriage proposal last weekend – is “back to full fitness”.

“Ahead of their trip to Nelspruit for the Telkom Knockout Cup on the weekend‚ Itumeleng Khune is medically fit and has joined the team in full training‚” Chiefs posted in an injury update story on KaizerChiefs.com.

“Khune has been recovering from a groin injury he picked up in the game against Baroka FC in September.”

Khune had set social media alight as he sensationally proposed to girlfriend Sphelele Makhunga this past weekend.

Despite the announcement of the keeper’s return to fitness‚ Middendorp does seem likely to have Bvuma in his starting XI against Maritzburg‚ with Khune perhaps on the bench ahead of youngster Brylon Petersen.

The coach had berated himself for rushing Khune back from injury in Chiefs’ 1-0 league win against Baroka at FNB Stadium on September 28‚ where the keeper limped off injured after just 28 minutes.