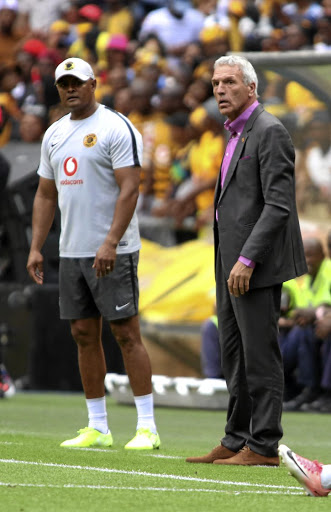 Having had two stints at Maritzburg United between 2009 and 2014, Kaizer Chiefs coach Ernst Middendorp knows the Team of Choice in and out and his knowledge of the KwaZulu-Natal club could be a huge advantage for Amakhosi.

This is an impression Chiefs assistant mentor Shaun Bartlett has given ahead of their Telkom Knockout semifinal showdown versus Maritzburg at Mbombela Stadium on Sunday (3pm).

"The main guy that knows everything about Maritzburg is the head coach, he knows them inside out and all the players as well, what are their strengths and weaknesses. That should be benefit us as a team," said Bartlett.

Amakhosi will go to war against the Team of Choice without their influential trio of Daniel Akpeyi, Eric Mathoho and Willard Katsande, due to suspensions.

Mathoho was red-carded in their 3-2 win over Orlando Pirates two weeks ago, while Akpeyi and Katsande picked up their fourth yellow cards in the same match.

While believing other players can step up to the plate and do the job with aplomb, Bartlett admits the trio's absence will still test the team's resolve.

"It will be a big test [to be without Mathoho, Katsande and Akpeyi] of character. But with the [eight] changes we made against Chippa United, there are players who are capable of doing the same job, if not better," said the Chiefs second in command.

Bernard Parker will be out to preserve his 100 percent scoring record in cup matches against Maritzburg United when Kaizer Chiefs meet the ...
Sport
1 year ago

"We just have to make sure they understand how we want to play and what's necessary, but the result on Sunday is more important than the performance."

Amakhosi are heading into this TKO clash high in spirit as they sit comfortably top of the log.

Bartlett is of the view that their title credentials depends on consistency.

"Anything is possible, but it's still early days we've only played 11 games.

"Nobody is given a league title in November, December," noted Bartlett.

He continued: "Games are coming thick and fast, that's why we have a squad that are ready to compete which we saw against Chippa, making eight changes and still managed to win the game."