Bafana coach Stuart Baxter says pressure will be on Egypt 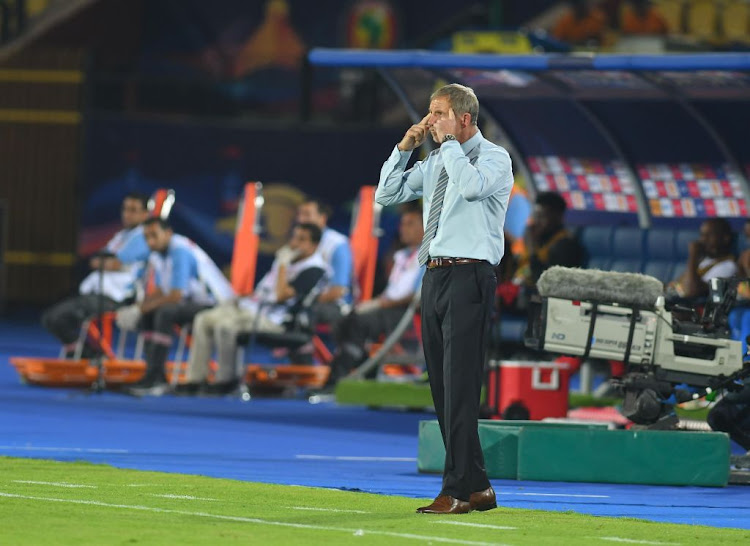 With Bafana's last 16 clash against Egypt being the underdogs against the favourites, they need to quieten the crowd at the 75‚000-seater Cairo International Stadium cauldron in their hugely anticipated Africa Cup of Nations match.

Javier Aguirre‚ who was the coach of Mexico against Bafana in the opening match of the 2010 World Cup‚ is not a popular head tactician of Egypt because his football is seen as too conservative.

This is despite the fact that Egypt went through the group stages unbeaten following a clinical 1-0 victory over Zimbabwe‚ 2-0 against Democratic Republic of Congo and 2-0 against Uganda.

The high price of tickets‚ as in 2010 in South Africa‚ means that the real Egypt fans won't necessarily be at the stadium and hardline president Abdel Fattah al-Sisi is perceived as using the tournament for self-promotion.

Members of the team‚ including star player Mohamed Salah‚ have come under fire for supporting controversial midfielder Amr Warda who was sidelined for sexual harassment charges over lewd SMSes.

Bafana not among the top seeds for 2021 Afcon qualifiers draw

Even if Bafana Bafana confounds the form book and the critics by going all the way to win the Africa Cup of Nations in Egypt‚ they will still not be ...
Sport
2 years ago

All of which has watered down the positive feeling for the host team, although the atmosphere at the Cairo International Stadium is always spectacular whenever Egypt play.

Bafana‚ if they are to stand any chance of an epic upset‚ need to try harness some of the disgruntlement felt at Egypt‚ Bafana coach Stuart Baxter has said.

“The fact that we're playing against the home nation is inspiring. And knowing the Egyptian people‚ knowing their passion for football and knowing that their expectations are very high‚ knowing that they have some great players‚ I believe the pressure is probably more on them‚” Baxter said during the pre-match press conference on Friday.

“Because for them it will be a national disaster if South Africa beat Egypt. For us it will be very disappointing. Obviously at the beginning of the game they'll have massive support. And maybe one of the jobs we have is maybe quieten the crowd by maybe being a tougher opponent than they expect.”

Give it your all, Bafana Bafana!

After taking an unconvincing path to the knockout phase, Bafana Bafana have a great opportunity to show all and sundry that they have some competence ...
Opinion
2 years ago

How can Bafana do that?

Probably partly frustrating and containing Egypt with the excellent structure South Africa showed in the group stage‚ even if Baxter's football has also been castigated at home for its conservatism.

Baxter‚ though‚ has also promised to offer a lot more in attack than in the 1-0 Group D defeat against Ivory Coast‚ 1-0 win against Namibia‚ and last-gasp 1-0 defeat against Morocco.

Baxter said Egypt have looked capable of lifting the trophy.

“Certainly Egypt are among the favourites. For us to stop individual players‚ we have to do that as a team‚” the Bafana coach said.

Bafana Bafana coach Stuart Baxter says if Bafana Bafana are in a last-16 matchup against the 2019 Africa Cup of Nations hosts‚ and written off as ...
Sport
2 years ago

“To man-mark is foreign to the way we play‚ and also it's not in the South African mentality‚ I don't think to‚ let's say‚ bend the rules to stop an opponent. We must have a collective strategy that can stop Egypt's best players. And there are some very good players. You mention Trezeguet‚ Salah - those are the attacking options.”

“They have good runners from midfield. They have offensive fullbacks. They can cause you problems from many angles. I'm hoping that the boys take on board what we've spoken about. And I think if we do then it will not be an easy game for Egypt.”

Although Liverpool hitman Salah has been gaining momentum with two goals from the right wing‚ left wing Trézéguet has been Egypt's best attacker.

Bafana have their best attacker‚ winger Themba Zwane‚ suspended‚ and Baxter will look to Lebohang Maboe‚ Sibusiso Vilakazi or Thembinkosi Lorch to step up.

Egyptians are nowhere near as confident as South Africans might think of their national team beating Bafana Bafana in Saturday's 2019 Africa Cup of ...
Sport
2 years ago

Losing attacking midfielder Themba Zwane for the crunch last-16 clash against hosts Egypt at the imposing Cairo International Stadium is a big blow ...
Sport
2 years ago
Next Article