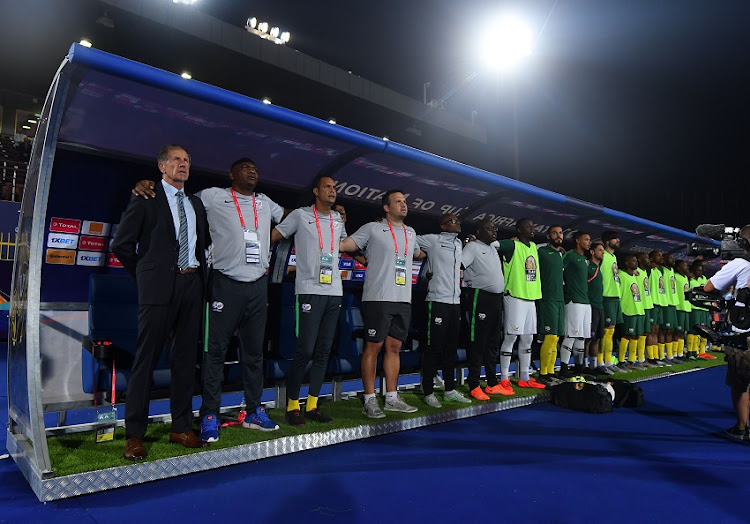 Stuart Baxter (head coach) of South Africa and staff during the African Cup of Nations match between South Africa and Namibia at Al-Salam Stadium on June 28, 2019 in Cairo, Egypt.
Image: Ahmed Hasan/Gallo Images

Bafana Bafana coach Stuart Baxter says if Bafana Bafana are in a last-16 matchup against the 2019 Africa Cup of Nations hosts‚ and written off as no-hopers‚ then why not attack Egypt?

This from a coach whose defensive tactics have provoked anger from South Africans‚ as Bafana scraped into the last-16‚ where they meet Egypt at Cairo International Stadium on Saturday night (kickoff 9pm)‚ as the fourth-best third-placed finishers.

Baxter had also said his team would try to rattle Ivory Coast in their Group D opener.

The Egyptian mid-summer heat of that 4.30pm kickoff game might have played a role in a structured 1-0 defeat where the attack failed.

But‚ facing the hosts‚ in the knockout phase - and cup competitions at domestic level are Baxter's forté - perhaps the coach is genuine saying there might be nothing to lose setting free his attackers‚ to some extent.

Especially since everyone expects the Pharaohs to win.

"To be brutally honest I'm happy about that‚" Baxter said.

"[But] I don't think there's anyone in our dressing room who is expecting Egypt to win.

"We've played Ivory Coast‚ Morocco‚ Nigeria‚ Senegal. And every one of those games could have gone the other way. That doesn't make you feel hopeless.

"I think the players partly feel‚ 'We can play better than we have'‚ and partly‚ 'But it was still close'.

"So we know that this is about squeezing a bit more out. And maybe this tournament is a big thing for a few of the players. And maybe they have been a bit nervous no matter what we say to them.

"But that's got to go out the window‚ because this is a great opportunity to upset the apple cart.

"And maybe we can't. But I don't want to go away from the game feeling that we never really pitched up. A close game‚ but we lost.

"You know‚ if we're going to get beat‚ let's get beat with then flag high‚ not going there apologising."

Bafana are often better against the bigger teams.

Even their two group stage defeats - they also lost against Morocco 1-0 - were a lot better in quality than the scrappy 1-0 win against Namibia.

On top of all that‚ since we are in the process of happily getting carried away with Bafana's chances‚ Egypt have not caught their public's imagination under former Mexico coach Javier Aguirre - who met Bafana in the opening game of the 2010 World Cup.

A disgruntled populace is exactly the sort of chink Baxter might want to exploit.

"That's what I'm saying - which is‚ do we allow Egypt then to get into a rhythm‚ or do we try to upset the apple cart and get the crowd against them.

"That's another reason why I don't want to be in the back foot too much‚" he said.

It is one thing saying you want to attack‚ and another when‚ 10 minutes in‚ Mohamed Salah skins Sifiso Hlanti and everyone snaps back into frigid mode.

But‚ in this unpredictable Nations Cup‚ from this Bafana who have staying power‚ if nothing else‚ and a stubborn countenance in the mould of their coach‚ who knows?