'It is a hostile situation‚' says Siphiwe Tshabalala 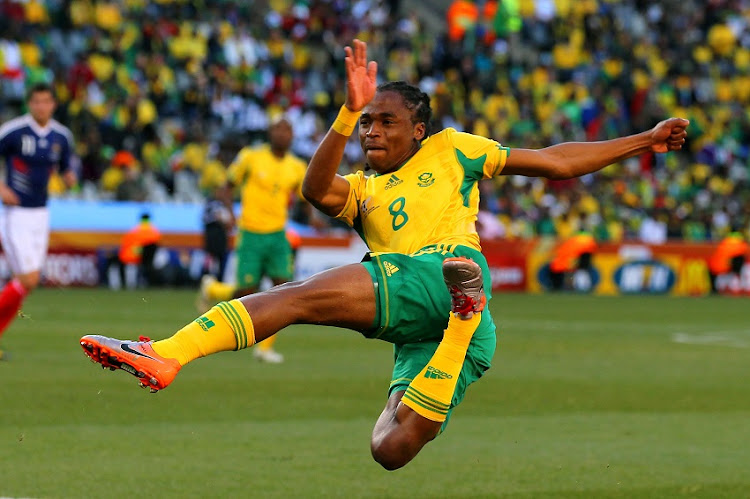 Siphiwe Tshabalala knows all too well the cauldron atmosphere of facing Egypt in Cairo‚ but believes the current Bafana Bafana can use it to their advantage when they take on The Pharaohs in their Africa Cup of Nations second round clash on Saturday.

Tshabalala is the third most capped Bafana player of all time and represented the country on 89 occasions‚ behind only Aaron Mokoena (107) and Itumeleng Khune (91).

Four of those caps came against the Egyptians‚ including two in Cairo‚ one in Johannesburg and the other in neutral London.

He played in the 2-1 friendly victory at the Cairo International Stadium ahead of the 2006 Nations Cup finals‚ and then again when Bafana visited for a Nations Cup qualifier that finished 0-0 in 2011‚ Tlou Segolela missing a gilt-edged chance at the end to seal a famous win.

“It is a hostile situation‚” Tshabalala tells SowetanLIVE.

“The crowd will be very intimidating and they will want to show the Bafana players they are right behind their side.

“I am sure it will be a sold-out affair from what we have seen in the tournament so far and that will add a lot to the occasion. It is big.”

Tshababala says the players have to simply focus on what happens on the pitch and not look to the stands.

“It is very difficult to play there‚ but at the same time it is an amazing experience.

"That is how the players must look at it. I certainly think it is possible to get a [positive] result.”

Tshabalala also featured in a 1-0 Nations Cup qualifier win against Egypt at Ellis Park in 2011‚ and a loss by the same margin in London in 2006.

He admits it is chalk and cheese between playing the North Africans in their own back yard and away.

“It is definitely more difficult to play them there [Cairo]‚ there is a difference to how they approach games. They feed off the packed stadium and the atmosphere‚ which is always amazing.

“I think they will look to attack Bafana from the first whistle‚ to also get the crowd into the game and on their feet.

"From there they can build pressure. They have got plenty of quality in the team too.”

Tshabalala says he always enjoyed playing in such atmospheres though‚ and that opposition teams can also get a lift from playing in a packed stadium.

This is especially so if you take into consideration the occasion – the host nation in a must-win knockout fixture that will see their star-studded side ousted early from the competition when much was expected.

That will bring its own pressure on the Egyptians and is potentially something Bafana can exploit.

“I always felt it was good to play in a full stadium‚ even away from home. That is the kind of game you want to play‚ even though it can be intimidating. These are the challenges you must face.

“I doubt anyone will give Bafana a chance on Saturday‚ even though I think can win‚ and that can sometimes work in your favour.

“You can approach the game by saying‚ ‘we have nothing to lose‚ let’s just go out there‚ do our best and have some fun’.

"And when you are relieved of that pressure‚ anything can happen …”