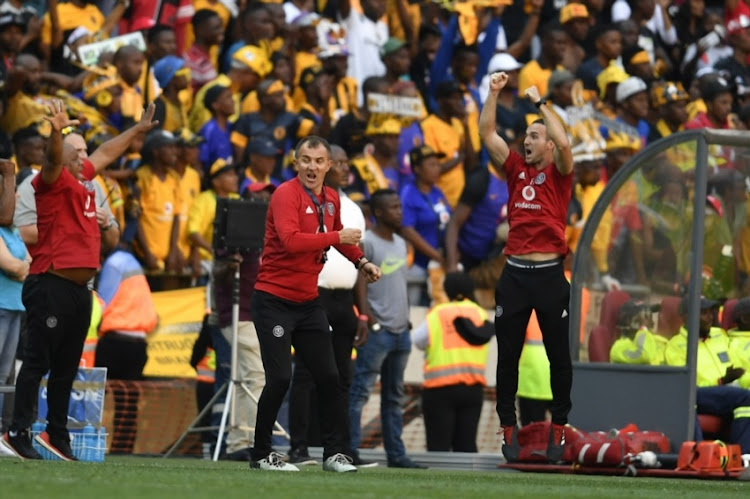 Orlando Pirates had to bring out their best in order to get victory against gallant AmaZulu and secure their slot in the semi-final stage of the Telkom Knockout on Saturday night in Durban.

The Buccaneers had to dig deep at Moses Mabhida Stadium after their 36th minute goal from the effort of Thembinkosi Lorch was nullified by Bonginkosi Ntuli.

The second half produced no goals as Usuthu pushed Pirates‚ who are searching for their first piece of silverware on four years‚ to extra-time.

Man-of-the-match Lorch completed his brace in the 93rd minute with Xola Mlambo sealing the deal.

Coming into the match on the back of success in the Soweto derby‚ coach Milutin Sredojević‚ said Pirates knew they had to snap out of the Soweto derby honeymoon quickly and return to reality of facing a stubborn and formidable for in the form of AmaZulu.

AmaZulu held Pirates to a credible 1-1 draw in the league recently.

“We have been on honeymoon after winning the derby. It was very important that we keep ourselves firmly grounded.

“We knew that we were playing against a team that has never say die‚ never give up approach. We need to match them in all aspects. We needed to fight and outfight them and run and outrun them. We needed to give 200 percent having in mind what kind of opponent we had in front of us.”

The Serb admitted that his side struggled in the opening minutes.

“In the first 20 minutes we had a poor entrance into the match because we had high pressure from the opponent and that meant we had a problem to settle‚ Later‚ we slowly came into the game.”

Sredojević lamented the fact that Pirates were unable to hold on to their lead which lasted no longer than a three minute quickie when Ntuli headed above goalkeeper Siyanbonga Mpontshane.

“This was a critical phase when we scored the goal. The first two three minutes you really need to take care and be on your toes and not allow the opponent to equalise. Critically‚ we conceded from a corner kick. We identified the cracks and gaps at half time‚ we bought ourselves in position that the goal for Xola (Mlambo) we scored at the right time.

“Later on we were changed the format immediately from four to three defenders in closing the opponent that looked to exploit us especially on the right flank. We scored the third goal and put Mpho Makola hoping that with maturity and seniority he will help us to close the game the way we wanted.

Lorch could have emerged from the match with hat-trick but the foot of the upright kept out his effort.

“All our players have shown that they are individuals who want to serve the team in the best possible way. They are aware that they are not carrying their names while wearing this great jersey and badge. They are just coming to be servants and soldiers of the team. Football paid us back‚” said Sredojević.

“Credit must go to the technical team that has worked very hard to touch every detail of this match. Together with our players‚ our management and our supporters‚ that has been behind us throughout. We have succeeded to pass through to the semi-final of the Telkom Knockout Cup.”