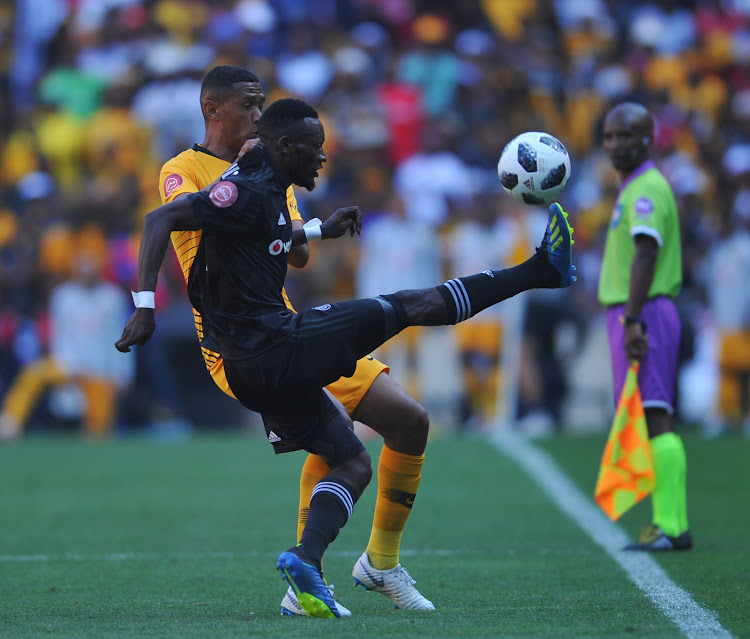 Augustine Mulenga of Orlando Pirates is challenged by Mario Booysen of Kaizer Chiefs during the Absa Premiership match at FNB Stadium in Johannesburg on October 27, 2018 at FNB Stadium.
Image: Sydney Mahlangu/BackpagePix

Orlando Pirates striker Augustine Mulenga has pleaded with the club's supporters to show more belief in the partnership he is developing with Zambian counterpart Justin Shonga.

Mulenga‚ who was named man-of-the-match after producing a sterling performance in Saturday’s 2-1 Absa Premiership Soweto derby win against arch-rivals Kaizer Chiefs‚ said it's too early to rule them out from scoring more goals this season.

“The good thing for me is that if I don’t score I do create‚” said Mulenga‚ who combined well with Shonga on the left side of the field before laying an incisive pass for Vincent Pule’s tap in at the FNB Stadium.

Both Mulenga and Shonga provided the assists for the goals scored by Innocent Maela and Pule as the Bucs stretched their unbeaten run against Chiefs to eight league matches with their second successive league victory over Amakhosi on Saturday.

The Zambians are often criticised for reserving their best for Chipolopolo‚ their national team.

They have scored a combined total of three goals for Bucs in eleven league matches this season‚ with Pule leading with four strikes after his winning goal against Chiefs.

“The difference between how we play for the national team and Pirates is the approach‚" he said.

"What I can say is that we just have to continue working hard and be at our level best in order to do what we do the best (scoring goals).”

Mulenga also pleaded with the supporters to give Shonga more time and support as he believes the best is yet to come.

Shonga missed a chance to equalise for Bucs on Saturday when his penalty was brilliantly saved by Chiefs goalkeeper Itumeleng Khune.

He did well though to provide the assist through his corner kick that was headed in by Maela in the 28th minute to cancel out Khama Billiat’s early goal for Chiefs.

“What I can say is that when you miss a goal the supporters start doing substitutions symbols‚" he said.

"But I just have to encourage Shonga to look up and forge ahead because we are the only players that can deliver.

“So I encourage Shonga to keep on pushing.

Mulenga said what encourages him most is that even though he has not scored as many goals this season‚ his overall contribution to the team is being noticed‚ pointing to his man-of-match performance on Saturday as the best example of that.

“There are so many games in front of us and the goals will come‚” he promised.

Pirates coach Milutin Sredojević echoed Mulenga and said:“When you score one is happy but when you assist‚ two people are happy‚ the one who assisted and the one who scored.”

In a post-match press conference following his team's 2-1 Soweto derby defeat against Orlando Pirates where he often came across as defensive‚ Kaizer ...
Sport
3 years ago