How Ramagalela is leading the way in front of goals 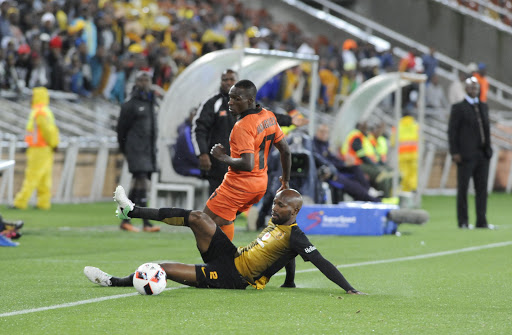 Polokwane City striker Rodney Ramagalela is leading the PSL goal scoring charts on the half way mark of the campaign with eight strikes to his name.

Polokwane City striker Rodney Ramagalela is leading the PSL goal scoring charts on the half way mark of the campaign with eight strikes to his name.

The 28 year old “Rama G”‚ who has scored 12 goals since January in all competitions‚ has put himself as a serious contender for the Lesley Manyathela Golden Boot Award at the end of the season.

Here are five things that makes him the top marksman that he is.

Ramagalela was a late starter in professional football and things have not always went smoothly for him which explains his determination to succeed.

After a good start at Black Leopards‚ he moved to Mamelodi Sundowns but he could not command a regular place and he later went to Golden Arrows before finally settling at City where he is enjoying his game at the moment.

A lot of South African attackers have been poor with their finishing this season‚ leaving Orlando Pirates coach Milutin “Micho” Sredojević to remark that is the worst he has seen in more than 20 years as a coach but Ramagalela has been the shining light.

His exquisite and long range stunner against Denis Onyango to beat Mamelodi Sundowns goalkeeper Denis Onyango from about 30 metres was a classical example of how composed he can be.

Despite being at age of ripe 28‚ Ramagalela still out-runs most of the younger defenders in the league.

Given the amount of work that he is said to do behind the scenes‚ he is unlikely to lose any of his sharpness in the second round as he will be looking to finish the season as the league highest goal scorer.

Ramagalela is versatile as he can operate as a traditional number nine in the box or as a false number nine behind the strikers and he can also drop deep to collect balls from the midfield when his team-mates struggle to create opportunities.

Depending on the game plan by his coach Bernard Molekwa‚ Ramagalela can also be used as a winger to deliver crosses in the box.

Good in the air

He score most of his goals by foot but he is always an aerial from corner kicks because of his height and he is not bad when it comes to taking free kicks on the edge of the penalty box.