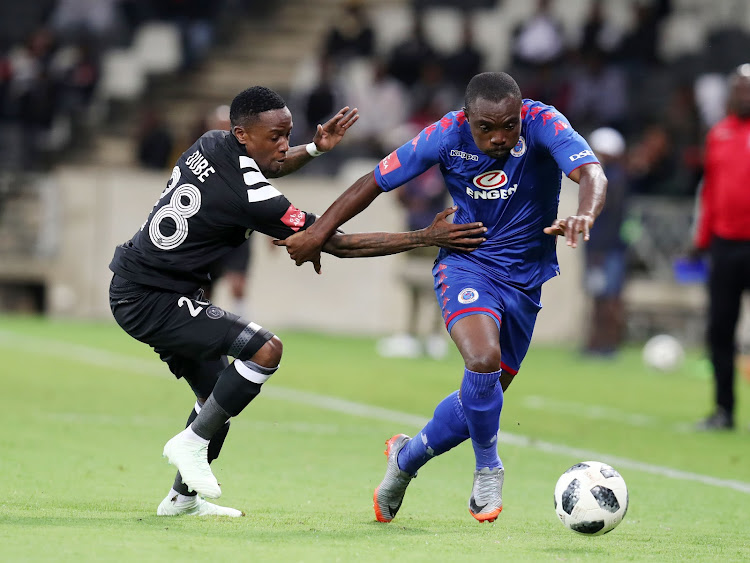 Orlando Pirates’ title aspirations suffered a huge blow when they were held to a goalless draw by SuperSport United in their highly exciting PSL encounter at Mbombela Stadium in Nelspruit on Wednesday night.

It was not a desirable result for both teams as second-placed Buccaneers have lost ground on leaders Mamelodi Sundowns by three points having played one more match while United remain third from the bottom of the log.

Clearly the better side on the night in terms of possession and chances created, Pirates will look back at the misfortune of having been denied by the woodwork twice in quick succession in the first half from the efforts of Mpho Makola and Luvuyo Memela.

The first chance fell to Makola after 22 minutes but there was nothing he could do as his thunderous shot only managed the cross-bar with United goalkeeper Ronwen Williams beaten just after the half hour mark.

A few minutes later, lady luck once again refused to smile on the Buccaneers as Memela could only watch in disbelief when his close range shot ricocheted off the upright with Williams beaten.

United had their few moments on the attack with the likes of Thuso Phala, Reneilwe Letsholonyane and Evans Rusike leading the way but they could not find the back of the net.

Having dropped two crucial points, Pirates, who came into this match on the back of five successive wins in the league, will hope that Bidvest Wits beat Sundowns on Saturday at Loftus and they must AmaZulu to refresh their title ambitions.

The match got off to a thrilling and flying start as they attacked each other relentlessly and created chances at both ends during the opening stages but there was no goal to celebrate for the sizeable crowd.

Pirates suffered a scare in the after 17 minutes when goalkeeper Siyabonga Mpontshane needed medical attention after he got hurt trying to save an aerial ball but he reacted well to treatment and continued with the match.

Pirates could have taken the lead in the 22nd minute but Justin Shonga’s left footed shot inside the box went just wide of the cross-bar after United defender Clayton Daniels failed to connect and clear the ball from the left wing.

Mpontshane nearly gifted United and Phala a soft goal when he forgot the basics of goalkeeping by allowing the ball to slip through his butter fingers but fortunately it went wide of the upright for safety in the 69th minute.

Pirates continued to dominate in the closing stages but they could not find the winner to excite coach Milutin Sredojević as Kaitano Tembo’s United held firm at the back for a crucial point that will go a long way in their mission to get out of the relegation zone.