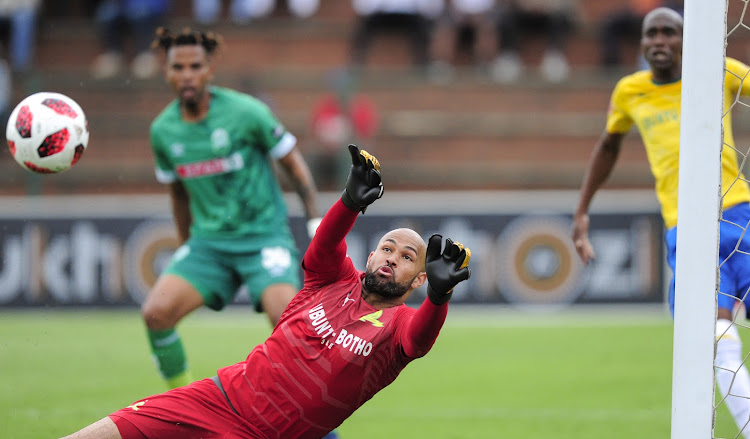 Reyaad Pieterse of Mamelodi Sundowns FC saves a shot at goal during the Absa Premiership 2018/19 game between AmaZulu and Mamelodi Sundowns at King Zwelentini Stadium on 15 September 2018.
Image: ©Gerhard Duraan/BackpagePix

Reyaad Pieterse says he wants to be Bafana Bafana’s No.1 goalkeeper‚ and that is the reason why he joined Mamelodi Sundowns.

To even break into Bafana consistently Pieterse will have to work on an aspect of his game where he can have a tendency to go to pieces in a match‚ such as in his exceptionally nervy debut for Sundowns.

The keeper received a roasting for playing a hand in all three AmaZulu goals in a 3-3 Absa Premiership draw in Umlazi last Sunday.

Luckily for Pieterse‚ he managed to bounce back with a clean sheet in his next game‚ helping Sundowns beat Lamontville Golden Arrows 1-0 in KwaMashu last Wednesday.

“It’s been really good‚” Pieterse said of his move to the 2016 Caf Champions League winners in August.

“I’ve been enjoying the opportunity I got given‚ so I’m blessed about that.

“The debut I got against AmaZulu wasn’t the ideal debut that one wants. But I learnt from my mistakes in the second game against Arrows. And I’m glad I could contribute to the team and get a clean sheet in that game.”

Some might question why Pieterse would go from SuperSport United‚ where he largely shared the goalkeeping duties with Ronwen Williams‚ to Sundowns‚ where he competes with three top-class glovemen in Denis Onyango‚ Kennedy Mweene and Thela Ngobeni.

Pieterse hopes the competition pushes him to heights of perfection and consistency he never achieved at SuperSport‚ and before that playing second fiddle to Itumeleng Khune at Kaizer Chiefs.

“That’s one of the reasons why I joined Sundowns – because you know that when you compete against the best you only get better‚” he said.

“I want to compete for the Bafana spot as well. And I know that working with the likes of Kennedy and Denis‚ and working with coach Wendell [Robinson]‚ I will definitely improve.

“I just know that I need to put my head down‚ keep grafting‚ keep working on my weaknesses‚ and on my strengths.”

At Downs‚ Pieterse finds a coaching staff of former Bafana boss Pitso Mosimane and goalkeeper-coach Robinson‚ who has worked with almost all the junior national teams‚ who know a thing or two about international football.

“Obviously they know my ambitions. And even when I met with the president [Patrice Motsepe] he told me‚ ‘We want you to be the Bafana No.1’.

“I know what I need to do. It’s not going to be an easy journey because of the competition that I’ve got here. But it only makes it sweeter at the end of the day.”

Sundowns are out of action until their Absa Premiership matchup against Bidvest Wits at Lucas Moripe Stadium on Sunday‚ October 7.