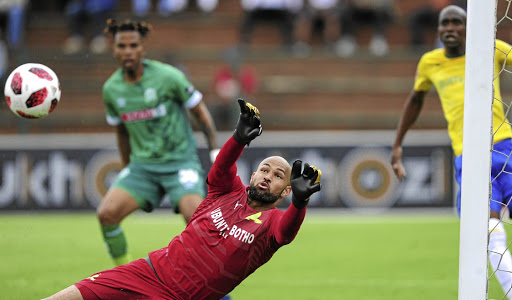 Mamelodi Sundowns goalkeeper Reyaad Pieterse is on a mission to be Bafana's number one.
Image: BackpagePix / Gerhard Duraan

The 26-year-old joined the Brazilians in the recent transfer window from SuperSport United where he struggled to wrestle the number one jersey away from Ronwen Williams.

At Kaizer Chiefs he had a similar problem as Itumeleng Khune reigns supreme between the goal posts.

"When I met with the president he told me he wants me to be Bafana number one. I know what I need to do because of the competition here but it will only make it that much sweeter at the end," Pieterse said.

He made his Downs debut in the 3-3 draw against AmaZulu last week where he conceded two soft goals.

Despite the poor performance, the technical team continued to show faith in him as he played in the 1-0 win over Golden Arrows days later. "For me personally the debut I had against AmaZulu was not ideal but we learnt from our mistakes. In the second game I got a clean sheet."

The former Shamrock Rovers man is looking forward to the challenge of learning from his fellow stoppers.

"Healthy competition ... that's one of the reasons I joined Sundowns because when you compete against the best you get better. I want to be competing for the Bafana spot and working with Denis, Kennedy and Thela will improve me."