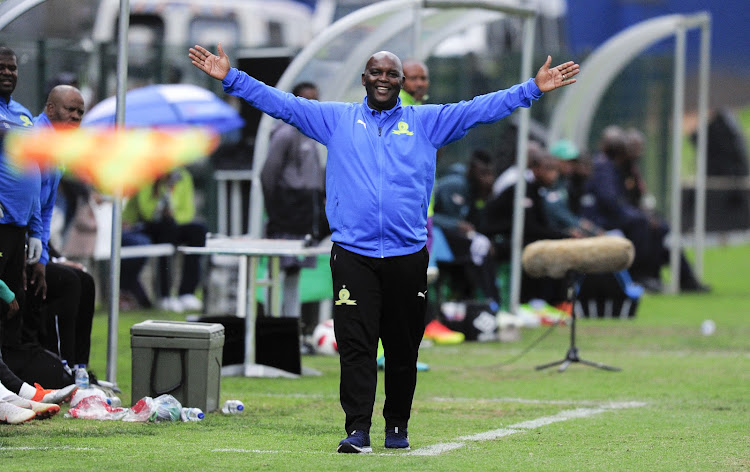 Pitso Mosimane flatly refused to talk about an assault charge opened against him the this week after his Mamelodi Sundowns snapped a 17-match winless run in all competitions with 1-0 Absa Premiership victory over Lamontville Golden Arrows on Wednesday night.

Nathi Ngwenya – of Ngwelela Security Services‚ the company that provides security at AmaZulu’s home matches – opened a case of assault against Mosimane on Monday.

He alleged the coach had punched him in the jaw at the end of the Brazilians’ 3-3 league draw against Usuthu at King Zwelithini Stadium in Umlazi on Sunday.

Mosimane was asked about the charge at the police following his team’s win against Arrows at Princess Magogo Stadium in KwaMashu.

“No‚ no no‚ we are not talking about it. I don’t have a comment on that‚ okay‚” he responded.

Mosimane preferred only to speak about the win over Arrows‚ which elevated his team to fifth place in the PSL‚ with 9 points from five matches.

“I think the [wet] weather conditions didn’t suit the kind of football that both teams like to play‚” he said.

“But what I like is that we adjusted to the conditions and we were grinding it out. We showed that we needed the points and we hung in there. We worked hard and we earned the win.

“It was not a game of pretty football. I will presume that the coach [Arrows counterpart Clinton Larsen] is also not happy with the conditions. It’s unfortunate but we had to do what we had to do.”

After having to come from behind to force a point in the thrilling 3-3 draw against AmaZulu‚ Mosimane said overall he leaves KwaZuu-Natal a happy man.

“I know some odds are a little bit against us. It doesn’t look that nice but we got four points out of a possible six‚” the coach noted.

“It’s not easy to get that. Even though we wanted to get maximum points‚ you’ve got to respect AmaZulu played well to be honest and they also deserved the draw.”

Mosimane admitted that his team are not as fluent and stylish currently as he would like them to be.

“We don’t look that convincing but if you really look at it‚ out of five [league] games we have played we kept three clean sheets‚ and we conceded the goal against Kaizer Chiefs and three against AmaZulu. I think AmaZulu dented our record to be honest.”

Commenting on the assault charge against Mosimane‚ KwaZulu-Natal police spokesman Lt-Colonel Thulani Zwane told this website on Wednesday morning that police were still investigating the matter and that no one had been arrested.