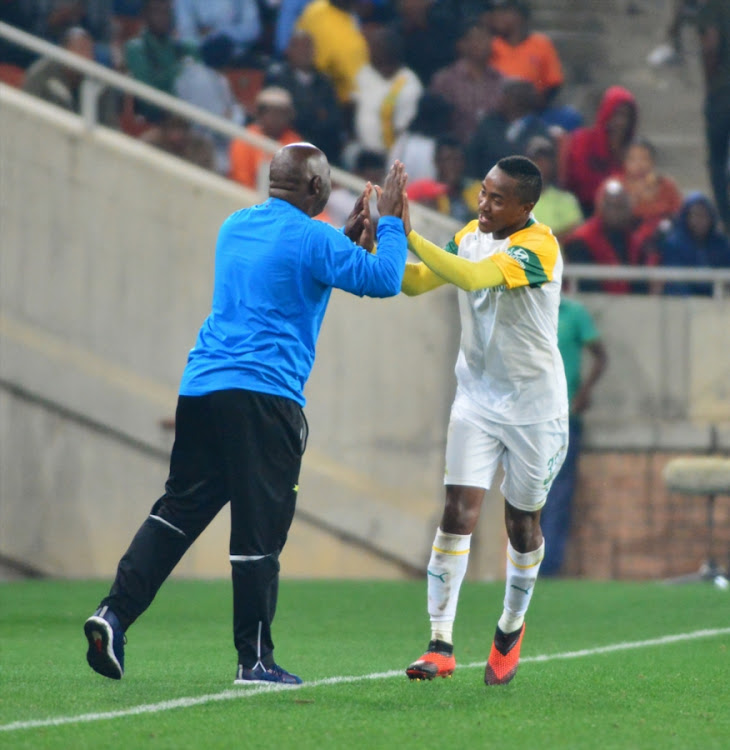 Mamelodi Sundowns forward Lebohang Maboe is congratulated by his coach Pitso Mosimane after scoring on debut against Polokwane City during an Absa Premiership match on August 7, 2018 at Peter Mokaba Stadium in Polokwane.
Image: Philip Maeta/Gallo Images

Mamelodi Sundowns coach Pitso Mosimane wants to turn his new forward Lebohang Maboe into a millionaire by helping the player secure a contract with a European club.

Mosimane said that turning young players from poor backgrounds into millionaires by selling them to overseas clubs is what continues to drive him.

In the six years that Mosimane has been in charge at Chloorkop‚ Sundowns have spent millions of Rands recruiting top quality talent.

Equally Sundowns‚ who are owned by billionaire mining magnate Patrice Motsepe‚ made millions from the sales of Bongani Zungu‚ Keagan Dolly and recently Percy Tau to European clubs.

Zungu joined French Lique 1 side Amiens via Vitória Guimarães in Portugal‚ and was soon followed by Dolly‚ who was snapped up by former Ligue 1 champions Montepellier.

Tau became the most expensive South African player in history when he joined Brighton & Hove Albion‚ from where he was loaned out to Belgian second division club Royale Union SG to acclimatise to European conditions.

Dolly‚ Zungu and Tau‚ according to Mosimane‚ are now millionaires and the Sundowns coach reckons Maboe‚ 24‚ will soon follow suit.

“The most important thing is to turn the boys into millionaires because we come from poor backgrounds‚ hey‚” Mosimane said this week.

“So I need to turn the boys into a lot of millionaires‚ a lot of billionaires.

“Take Lebohang Maboe from Maritzburg United and turn him into a millionaire.

“[I took] Percy and turned him into a millionaire. Keagan Dolly. Bongani Zungu. So that is what drives me.”

Mosimane said he remains hungry for more success as a coach.

During his highly successful five-and-a-half seasons at Chloorkop‚ Mosimane has won all major domestic and continental cup competitions except the MTN8.

Mosimane‚ who last season said that he may take a break from coaching‚ said he is still yearns for more.

“I want to win the next match. If Pep [Guardiola‚ coach of Manchester City] has got 23 trophies‚ and he is still coaching‚ who am I to say I have arrived or achieved?

“[Sir Alex] Ferguson won‚ I think‚ 46 trophies. [Jose] Mourinho won 28 or thereabout. There’s also Arsene Wenger. So really who am I to say I won everything. What did I win?

“Now I must start saying I have won more and I want people to listen to me. Tell me about Pep. How many trophies has he won. There’s more to win‚” Mosimane said.

Absa Premiership champions Sundown are not in action in this weekend’s round of matches‚ and next meet Bloemfontein Celtic at Dr Molemela Stadium on Wednesday‚ October 3.

Pitso Mosimane flatly refused to talk about an assault charge opened against him the this week after his Mamelodi Sundowns snapped a 17-match winless ...
Sport
3 years ago

Durban police say they are in no rush to speak to Pitso Mosimane after a case of assault was opened against the Mamelodi Sundowns coach at Umlazi ...
Sport
3 years ago

A Durban man says he is pressing ahead with a case of assault against Mamelodi Sundowns coach Pitso Mosimane.
Sport
3 years ago
Next Article