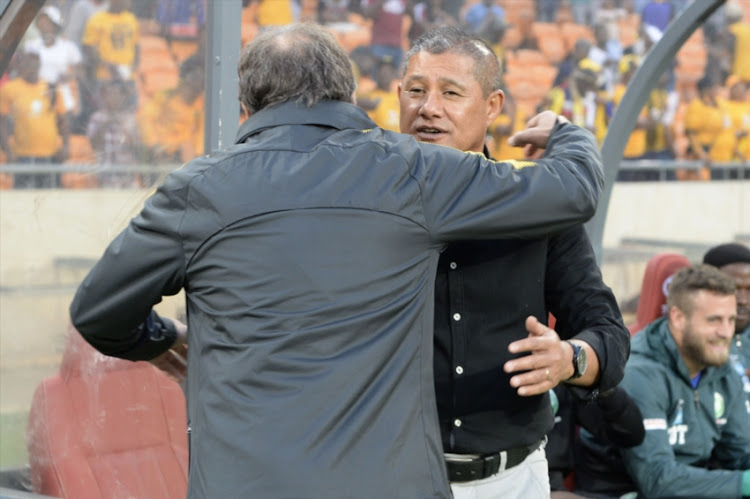 Johnson‚ though‚ said Usuthu were aware what to expect from an Amakhosi‚ who have taken an attacking approach under new coach Giovanni Solinas this season‚ when the two teams met at FNB Stadium on Saturday evening.

The AmaZulu coach said his side struggled play to instruction and respond to Chiefs’ high press with a response of getting out of their own half in their 2-0 defeat.

Johnson had travelled to Goble Park to watch Amakhosi play Free State Stars on Wednesday evening‚ only for Solinas to surprise and make seven changes to his XI‚ resting key players as Chiefs still managed a 2-0 win.

Johnson said the surprise move by his Amakhosi counterpart did not throw out his planning noticeably.

“Ja‚ look‚ watching them at Goble Park‚ whether they made 10 changes or 11 changes‚ the structure stayed the same‚” he said.

“The structure of the team‚ the way they were going to approach the game‚ was not going to change. And we prepared for that.

“Because against Cape Town City [in Chiefs’ 4-1 away win last Saturday‚ ahead of the Stars game] it was the same approach. Against Free State Stars it was the same.

“So we prepared for that. It was a matter of us making sure that we stuck to the instructions that we gave the players.

“In the first half we looked like we were maybe two feet behind them. And that’s why we conceded the goals.”

Johnson had come into the game against Chiefs from a 3-3 pound-for-pound draw against champions Mamelodi Sundowns in Umlazi last Sunday.

At FNB Usuthu were unable to come up with the same kind of answer to an ultra-attacking lineup and Chiefs’ high press.

Amakhosi are a different prospect – in no small part due to some impressive attacking signings – under Solinas from the more circumspect football they displayed under the Italian’s predecessor‚ Steve Komphela.

Johnson was cagey when asked to analyse the new-look Chiefs.

“I played Sundowns as well. And they attack very similar. And I was able to overcome them [Sundowns] in a lot of moments‚” Johnson said.

“So it’s not my place to criticise Chiefs or tell you how I think they’re going to play just because I am the opponent.

“And with respect it’s the same for every other team. I hope other coaches will not criticise me.

“But‚ playing against Chiefs – we knew they were going to do that [attack]. We had the plan for them to do that.

“In the beginning we didn’t have the energy to come out. If you’re comfortable on the ball and know what you’re doing to come out‚ then you’re supposed to come out.

“There is always one man free on the pitch. And unfortunately against Chiefs we didn’t use him in the right way.”

AmaZulu host Maritzburg United next in a KwaZulu-Natal derby at King Zwelithini Stadium next Tuesday (October 2).