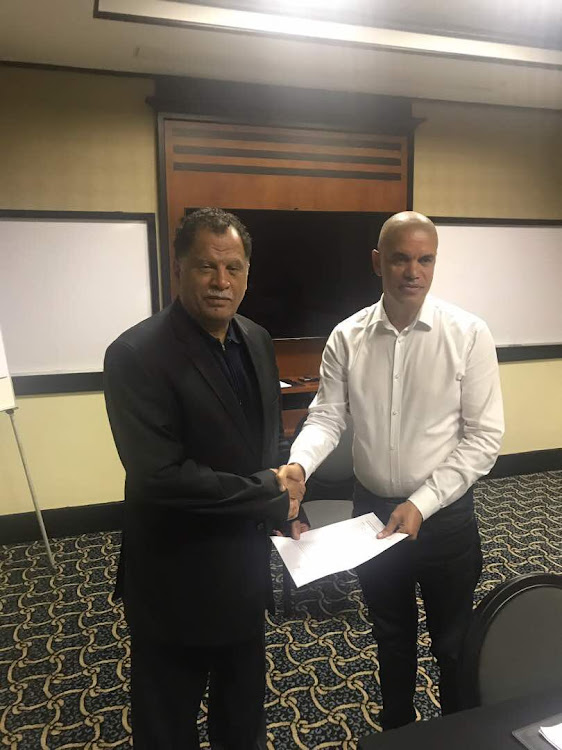 The SA Football Association president Danny Jordaan (L) and his challenger for the top job, Andile "Ace" Ncobo sharing a light moment together on Wednesday March 14 2018. Ncobo, though he accepted his nomination for Safa presidency, maintains he is not interested in the job.
Image: Safa via Twitter

This emerged on Thursday after Cosafa president Phillip Chiyangwa‚ who was delegated by international football mother body Fifa to deal with the deteriorating relations between presidential candidates Ncobo and Safa president Danny Jordaan‚ announced the outcome of a late night meeting that effectively called a shaky truce.

Chiyangwa said Ncobo's much publicised grievances with Safa were addressed in the meeting but he refused to divulge further into the matter.

The elections are slated to take place on March 24 but Ncobo wrote a letter to the Independent Electoral Committee (IEC)‚ highlighting irregularities in terms of gross violations of key constitutional imperatives by Safa.

The IEC subsequently withdrew from the elections‚ citing that Safa need to resolve certain issues before they can oversee their elections.

Ncobo had also called on Fifa to place Safa under administration for alleged gross violations of its electoral codes.

“There will be an electoral committee that'll be appointed or elected for any election that will take place‚" Chiyangwa said.

"The Safa national executive council is attending to that and Ace Ncobo won't be standing for the Safa elections.

"Ace's statement when he walked in was that he was not interested in the Safa presidency.

"I have responded to each and every concern Ncobo had and we killed any matter that arose.

Chiyangwa refused to be drawn into the Chief Mwelo Nonkonyana's matter in regards with an interdict the former Safa official filed to stop the elections from going ahead.

Nonkonyana‚ who is chairman of the House of Traditional Leaders in the Eastern Cape‚ filed papers in the South Gauteng High Court this week citing alleged irregularities that include the withdrawal of KPMG and the IEC from the election process.

“It would be like I'm telling Safa what to do.

"I don't want to interfere in Safa's own territory and other matters that they can deal with by themselves.

"I've left that bit for Safa to deal with but the critical matter has been dealt with‚” Chiyangwa said.

The SA Football Association (Safa) has accused the SA Sports Confederation and Olympic Committee (Sascoc) of costing it “millions” in sponsorship by ...
Sport
4 years ago

Thembi Kgatlana has said she was humbled to win the Most Valuable Player award at last week’s Cyprus Cup.
Sport
4 years ago