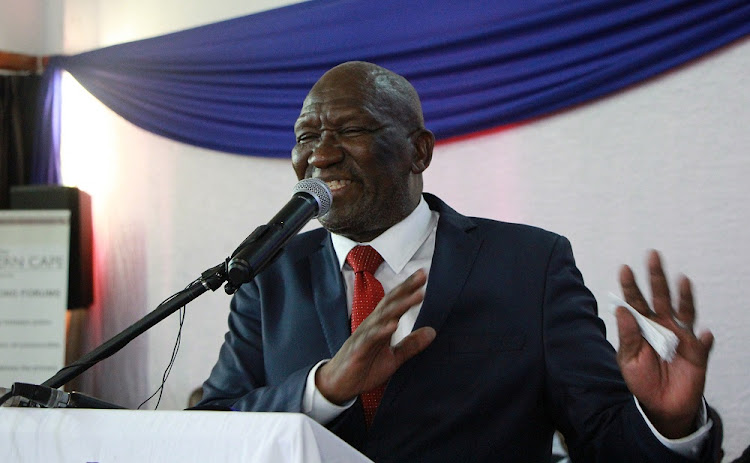 He's back and he wants the murder case of soccer star Senzo Meyiwa to be cracked immediately.

Newly appointed police minister Bheki Cele‚ who was known for his controversial‚ proactive policing stance during his previous stint in the job‚ has hit the ground running with warnings to criminals and support for his police force.

"The feeling‚ the vision and the agreement with the national police commissioner is that the Senzo Meyiwa case must be cracked now‚ not in the distant future‚" he said.

Meyiwa was shot and killed while visiting his girlfriend Kelly Khumalo at her mother's house in an apparent robbery in Vosloorus in October 2014.

Cele has instructed national police commissioner General Khehla Sitole to give him a "thorough briefing on whether the new task team is doing a proper job."

Sam Meyiwa was "happy" when former police minister Fikile Mbalula established a new task team to look into his son's murder but now is "more confident" that the case will be cracked.

"I was confident with Mbalula but I am more confident now because I know Bheki Cele knows his job as a police minister‚" he said.

Meyiwa questioned why Longwe Twala and Zandile Khumalo took so long to speak out about his son's murder.

Longwe Twala‚ the son of music veteran Chicco Twala‚ and Zandile Khumalo were present when the Bafana Bafana goalkeeper was killed in an alleged botched house robbery at his girlfriend Kelly Khumalo's home.

Last month the pair took to media platforms to air their side of the story.

Twala appeared on Metro FM to address allegations that he was the triggerman after a parody account‚ @AdvBarryRoux‚ made the claim on Twitter.

Speaking on Ukhozi FM two weeks ago‚ Zandile said Senzo‚ her sister Kelly‚ her mother‚ and the others were eating at the table when "people stormed the house."

"That one! I don't even want to talk to Kelly Khumalo or her family. Because my son was shot in her house. Her mother was there too. Being a mother‚ she should know how I feel about my son's murder‚" Sam Meyiwa said.

"Why is she not giving the real story to police? She was there. Her mother was there. Her sister was there. Why not talk the truth?" He said people may think he is "a stupid old fool" to push for police to find his son's killer but he could not live without justice.

"My son was my life. He was my everything. I need to know who killed him."