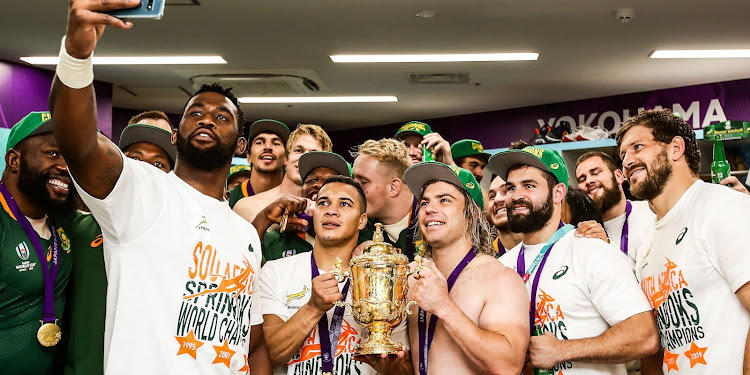 Eric Songwiqi‚ the former Emsengeni head master who discovered Springbok Rugby World Cup-winning captain Siya Kolisi‚ dropped his phone and it had to go for repairs.

However‚ that did not stop him from going to the Zwide Stadium in Port Elizabeth to watch South Africa collect their third Rugby World Cup title after beating England 32-12 in Yokohama on Saturday.

Songwiqi battled to hide his emotions‚ saying the win was a big one for the country‚ with the most important part being the black players who not only represented their team with pride‚ but contributed to the win.

Kolisi is from Zwide and finished his schooling at Grey High School in Port Elizabeth.

“People were so jubilant. They were singing. They were happy and they were behind the Springboks.

"It was so important to see that black people had representatives in the team and that shows there's a lot of potential we have in this country‚” Songwiqi said.

“You need this moment to inspire black kids and let them feel like they can emulate the likes of Siya Kolisi.

"I addressed the Emsengeni school recently and I told them it is possible for them to reach that standard if they keep on the right track of life and stay away from vices.”

Songwiqi‚ who's not always keen to take credit for discovering Kolisi in his past life as a rugby coach because of a lack of coaches‚ said it was a big moment for him to see being a black captain that lifted the Webb Ellis Cup.

“It shows we were all created by God and there's no discrimination with the one above.

"As his children‚ God has gifted us all. Anyone can be in the team and do well with the team‚” Songwiqi said.

“When you humble yourself‚ that's when you respect people and get blessings.

"They get added when you do well and that I think is the case with the national team. I'll congratulate Siya when I see him and the key is to remain focus.

"It's mission accomplished now for them.”

Grassroots rugby in Mangaung gets a leg-up

The Mangaung Rugby Club became the most recent beneficiary of a sports betting company's efforts to lend a helping hand to communities in need with a ...
Sport
2 years ago

On the morning when Springbok captain Siya Kolisi readied to lead his team onto the field in Tokyo, a world away in the Eastern Cape township of ...
Sport
2 years ago
Next Article