Want see the Rugby World Cup champions when they return from Japan? We've got the juice! 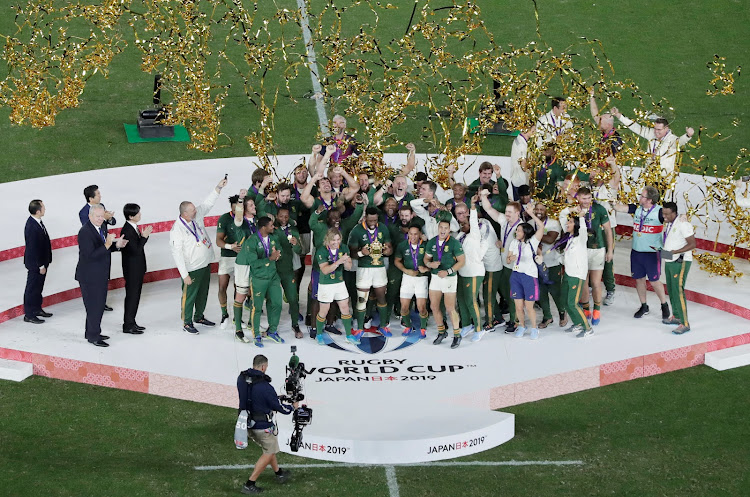 Want to see the World Champions arrive from Japan after their successful Webb Ellis Cup conquest in the Far East?

You’ll have to wait until Tuesday.

The Springboks had to delay their return because of Sunday's World Rugby Awards where they cleaned up after their heroics against England in Yokohama on Saturday.

For their superlative Rugby World Cup effort of being the first team to win the tournament having lost a pool stage game‚ the Springboks also walked away with the team of the year award.

Having lost only one out of 10 games this year while also winning the Rugby Championship‚ they are indeed worthy winners.

Back to the hearty arrival that awaits them‚ Erasmus‚ captain Siya Kolisi and ace pivot Handre Pollard will be the first to arrive‚ with the other players arriving in groups on Tuesday and Wednesday.

The Boks will also embark on a trophy tour starting on Thursday where they’ll be headed to Pretoria‚ Soweto and Johannesburg.

On Friday they’ll head down to Durban while the weekend will be spent in East London (Saturday) and Port Elizabeth (Sunday).

The Eastern Cape trip is significant as Kolisi is from Port Elizabeth while the crack backline players Makazole Mapimpi and Lukhanyo Am will be celebrated in East London.

The trophy tour will wrap up in Cape Town on Monday.

The planned RWC Champions Tour stops are as follow:

On the morning when Springbok captain Siya Kolisi readied to lead his team onto the field in Tokyo, a world away in the Eastern Cape township of ...
Sport
1 year ago

South Africa take on England the final of the Rugby World Cup in Yokohama, Japan, on Saturday. Stay up to date with all the action on the field as it ...
Sport
1 year ago

Through Handré Pollard's four penalties, South Africa took a 12-6 lead against England in the 2019 Rugby World Cup final in Yokohama.
Sport
1 year ago
Next Article