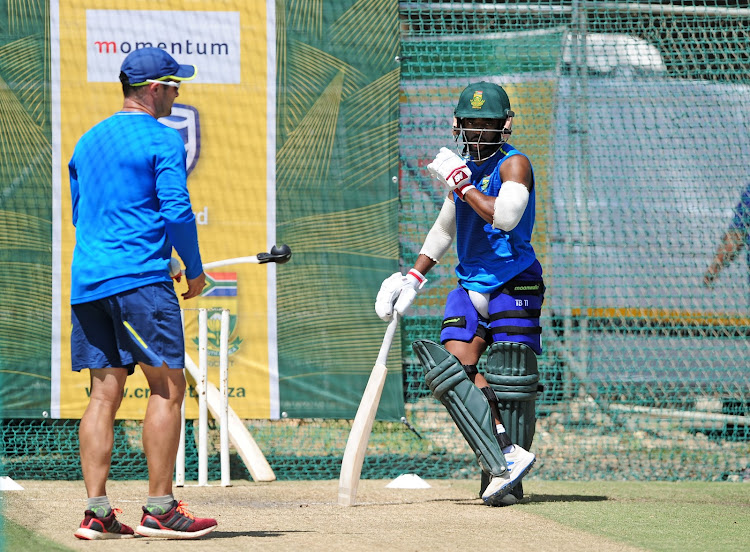 Mark Boucher has admitted that his maiden foray into international coaching was tough after the Proteas lost the Test and T20 series to England in the summer.

The Proteas lost 3-1 in the Test series despite winning the first match in Centurion.

Then they went down 2-1 in the T20 series‚ while the ODI series was drawn 1-1 because of the washed-out match in Durban.

Boucher insisted that the Proteas are in a rebuilding process and there is a lot of work to be done in all three formats.

“It was tough but I knew it was going to be tough‚” he said.

“I don’t want to get emotional about the whole thing but you have to try to be practical and look at where we are as a team.

"You have to understand that there is a lot of hard work that we must do.”

The Proteas' rebuilding process doesn’t get any easier‚ as they host Australia in three T20s and ODIs in the next three weeks‚ starting at the Wanderers on Friday with the first T20.

Asked to assess the Test side that was exposed by England‚ Boucher admitted that they are still a long way from where they want to be.

“With regards to Test cricket‚ we are a long way off the mark and we need to work hard there‚ especially in our batting‚” he said.

“Our batting let us down during the series and the guys need to get some confidence and up their level of skill.”

The numbers offer little comfort for Boucher‚ as SA failed to score more than 300 runs in their completed eight innings and failed to bowl out England twice in the four matches.

Boucher said the ODI side is evolving and they handed opportunities to a few young players in the absence of rested seniors. He said they have options with regards to the T20 side.

“In ODI cricket‚ it is a very young side and we rested a few players‚” he said. “It was a good opportunity to rest some seniors and we are happy with the way that went.

“We are in a stage where‚ I don’t want to call it rebuilding‚ but it is in a way. We gave opportunities to guys to stand up and fight for places.

“If there is a chance to give guys opportunities‚ then we must and I think that is important.

"Looking forward to the T20 World Cup later in the year‚ I think we have some great options available to us and that is something exciting.”

The options available in the T20 side include the possibility of former captain AB de Villiers coming out of retirement.

One of the positives to come out of the Test team was that Quinton de Kock was the leading run scorer with 380 after eight innings‚ while the likes of Dean Elgar‚ Faf du Plessis‚ Rassie van der Dussen and Zubayr Hamza struggled.

With the ball‚ Anrich Nortjé ended as the top wicket taker with 18 scalps and he was followed by Kagiso Rabada who shared second spot with Stuart Broad of England on 14 each.

In the ODIs‚ De Kock once again sparkled with the bat as he was the top run scorer with 187 runs. He was followed by his opening partner Temba Bavuma with 148.

De Kock continued his rich vein of form as he scored 131 runs during the T20 series‚ followed by Bavuma with 123.

Lungi Ngidi ended with eight wickets and was followed by Andile Phehlukwayo with five.

Perth has been a home away from home for the South African men’s national team.
Sport
2 years ago

The talking will continue‚ and no doubt too the speculation.
Sport
2 years ago
Next Article