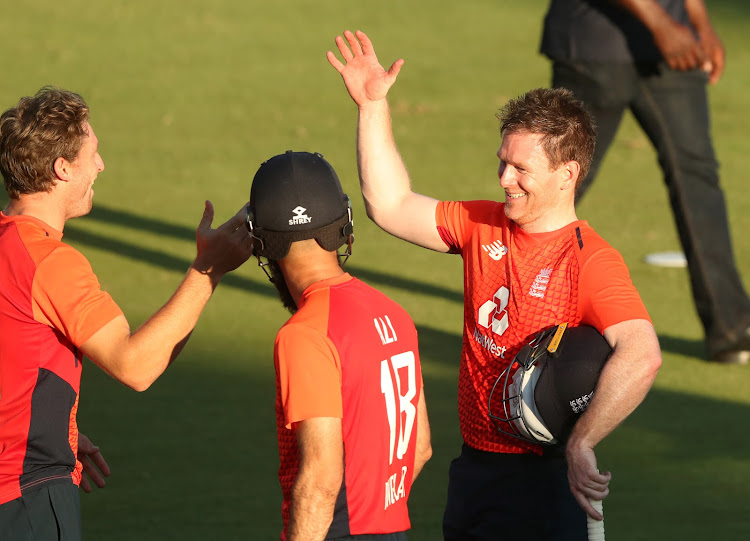 England captain Eoin Morgan celebrates winning with teammates after scoring the winning runs at the end of the match at SuperSport Park, in Centurion on February 16, 2020.
Image: REUTERS/Mike Hutchings

England ended their long tour to South Africa with a five wicket win over the Proteas in the third and final T20 at SuperSport Park on Sunday to wrap up the series 2-1.

Proteas won the toss and elected to bowl first and scored 222/6 but the England did not have too much trouble in their chase as they crossed the line on 226/5 with five balls to spare.

In their chase, England lost Jason Roy early for seven runs but Jos Buttler and Johnny Bairstow managed to rebuilt with a partnership of 91.

Their partnership was broken in the tenth over when Buttler was removed from the proceedings having scored 57 when he was caught by Tabraiz Shamsi at short third man from the bowling of Pretorius.

Bairstow followed him soon afterwards when he was clean bowled by Andile Phehlukwayo having scored a rampant 64 which included seven boundaries and three maximums.

The next wicket was that of Dawid Malan (11) when he was caught by Quinton de Kock from the bowling of Shamsi while their last wicket to fall was Ben Stokes on 22.

The other important partnership for England was the 61 between captain Eoin Morgan and Stokes.

For SA with the bat, the highlight was Heinrich Klaasen who sent a timely reminder to coach Mark Boucher about his white ball credentials with an elegant but brutal display.

Klaasen scored a belligerent 66 off just 33 balls which included four boundaries and four maximums and he was part of useful partnerships of 27 with Rassie van der Dussen and 64 with David Miller.

Proteas openers De Kock and Bavuma started the match in blistering form and their partnership reached the 50 runs mark from 22 balls after only fifteen minutes.

By the end of the first power-play, South Africa’s score was 64 with De Kock on 34 and Bavuma having contributed 29 as they put England bowlers in Moen Ali, Tom Curran, Mark Wood and Chris Jordan under the pump.

Their partnership of 84 was broken in the eighth over when Bairstow caught De Kock (35) at deep square leg off Stokes. Bavuma (49) followed his skipper soon after when he was bowled out by Adil Rashid.

The mightily dangerous England all-rounder Stokes returned in the 12th over to wreck Proteas’ rebuilding when he tricked Van der Dussen with a slower ball that was caught by Sam Curran at deep mid-wicket.

The dismissal of Bavuma brought forgotten batsman Klaasen who used the rare opportunity to put himself in the frame for selection for the T20 World Cup later this year.

Pretorius did not last long on the crease as he was caught behind by Buttler off Curran during the penultimate over and he was followed by Andile Phehlukwayo.

After salvaging a one-run win against England in their opening T20I , Proteas batsman Temba Bavuma said they need more of those kinds of wins to help ...
Sport
2 years ago

Experienced South African Dale Steyn has his eye on the Twenty20 Cricket World Cup in Australia this year as he takes on added responsibility as ...
Sport
2 years ago
Next Article